Andrew Davies caused a stir with the opening minute or two of Sense and Sensibility, but the adaptation quickly settled down into more familiar territory. There were some excellent moments, John and Fanny Dashwood being the stars of the episode for me. They were very well cast and, despite Austen's wonderful line about annuities being omitted, they were funny and awful in equal measure.

I thought Edward was too confident and Brandon too likeable. I would have preferred to come to know them more gradually, as the Dashwoods do, but this was perhaps because the entire adaptation is only three hours long. I thought Willoughby was not instantly loveable enough. However, I will be tuning in again for Episode 2! 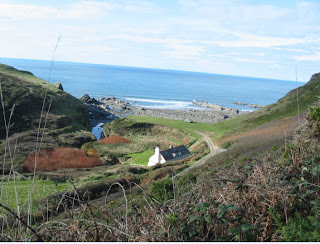 Perhaps the best bit of the show was the scenery. I thought it was a good idea to set Barton Cottage on the coast. It was a bit of artistic licence, perhaps, but easily believable, because so much of Devon is on the coast, and I thought it showcased the English coast wonderfully. 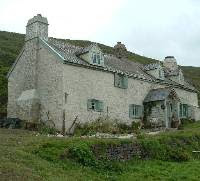 "Barton Cottage" is actually Blackpool Mill which, despite its name, is not in Blackpool, but in North Devon, on the Hartland Abbey estate. The Hartland Abbey website is well worth a visit - click here to visit it - particularly as it has a page devoted to information about the filming of Sense and Sensibility. Apparently, the outside of the cottage was changed so that it was almost unrecognisable, to make it look older. There are more photos on the Hartland website.

But best of all, "Barton Cottage" is a holiday home and is available to rent! So if you fancy pretending to be Elinor or Marianne this year, check out the Hartland Abbey website for details.

So what did you think of this adaptation?
Posted by Historical Romance Author at 5:34 PM

I agree with most of this post. John and Fanny Dashwood were superb, and Elinor excellent. Personally I really liked Edward Ferrars. I remember Hugh Grant's interpretation acted with the pinched and pained expression of a man suffering a terminal case of piles. Brandon is well-played but perhaps lacks the depth of Alan Rickman's portrayal. And compared with Greg Wise's coltish exuberance this Willoughby seems sly. However I'm very much looking forward to Part 2.