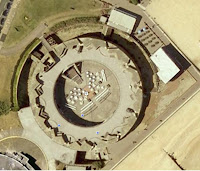 Summer is the time for going to the seaside and strolling along the prom, and a few weeks ago at Eastbourne I did just that, and was rewarded with a wonderful dsicovery.

Eastbourne is more generally associated with the Edwardian era than the Napoleonic wars, but it does have the most amazing redoubt, now restored to its early 19th century glory.

In the early 1800's the fear of a French invasion of Britain was very real. Napoleon moved troops to Boulogne and planned to ferry them across to the south coast. In response the British Government built over 70 Martello Towers plus three circular fortresses at Harwich, Dymchurch and Eastbourne.

In 1805, Nelson's victory at Trafalgar lessened the threat but plans had been laid and work began on the Eastbourne Redoubt, which took three years to build and only ever fired two shots in anger (at a French ship which strayed too close to the shore – the shots missed). 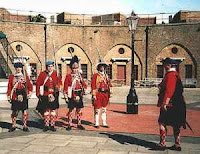 The Redoubt was used as an observation post and convalescent hospital during WWI and during WWII anti-aircraft guns were mounted on the gun platform. It is now a military museum and houses the regimental museums of The Royal Sussex Regiment and the Queen's Royal Irish Hussars.

Ironically, the Redoubt, which was built to defend the south coast, is now itself defended from the sea by the promenade, but I am so glad it has survived.

Posted by Historical Romance Author at 12:03 AM

Interesting post, Melinda. Brings the concerns of the past into focus.

Great post Melinda and a timely reminder that it is far too long since I visited the Redoubt especially as I live in Sussex. I look forward to a fascinating day out.

Thanks Jan, Kate and Jane. From the outside this museum looks quite uninspiring - in fact I think it is quite easy to miss it- but it is filled with interesting detail and the staff are so enthusiastic.

How interesting, Melinda. I've never been to Eastbourne. Now I have another reason to add it to my list of places to visit.

Nicola, it was very popular during the Edwardian era when it was called The Watering Place of the South (didn't you set "The Last Rake in London during this period???)

Glad you posted this, Melinda. I've been to Eastbourne but never knew about the Redoubt. Now I'll definitely make sure to visit the museum.