I first encountered Jane Austen as a teenager, which probably accounts for why I am fascinated with the way she manages to capture the teenage spirit.

We studied Pride and Prejudice at school. My teacher, Mrs A—, loved reading out the funny parts of the novel to the class, especially the ones that had Mrs Bennet in them. To me, she’ll always be the quintessential Mrs Bennet. As you would expect, many of the girls in the class started groaning the moment Mrs A—/Mrs Bennet started reading, which always conjured up for me the images of Lydia and Kitty. This combination of teacher enacting the mother, and students being who they were – teenagers – has probably skewed my vision of Pride and Prejudice forever.

Still, I think it’s one of the remarkable aspects of Jane Austen that doesn’t get discussed often enough. Her ability to represent teenagers accounts for why each successive generation seems to rediscover Austen in a way that the older folks find irritating. There’s that “been there, done that” feeling whenever the new generation re-discovers her. But then again, each successive group brings to the novel its own notions. 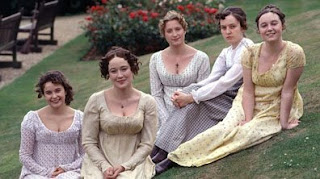 One only has to look at the difference between the 1995 depiction of Elizabeth Bennet by Jennifer Ehle (right) and the 2005 version with Keira Knightly (below). I love Ehle in the 1995 version.

But what the 2005 version shows you much more clearly is that this is a film about teens. 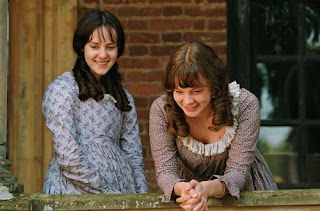 Jane Austen’s skill at capturing the teenage mind was especially remarkable because she did it a long, long time before teenagers were even invented. Apparently it was not until James Dean’s Rebel Without a Cause came out in 1955 that the concept of “the teenager” even came to exist. Before that, if you were a teenager, tough luck. You were either an overgrown child, or a very young adult. 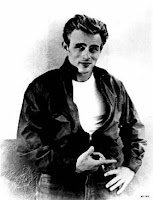 James Dean, by portraying a lot of the issues and problems of teenagers, put teenagers for the first time on the map.

To give you a sense of how good she was at portraying the teen mind, look at Lydia, Kitty, and Mary, who represent a range of teenage archetypes, from the “popular” girl (Lydia), to the follower who longs to be popular (Kitty), to the “nerd” outsider (Mary). Then compare these figures to Charlotte Bronte’s Jane Eyre. Jane Eyre goes through childhood to adulthood without ever passing through the “teen” phase. We never see it, unless you consider her childhood rebellion as her first teen gesture. But she was only ten. Jane Eyre is a different type of novel, obviously, but it’s much more typical of the way adolescence was depicted generally.

In this, if in nothing else, Jane Austen emerges as a pioneer (though there are plenty of other things she pioneered, too). Of course, if you mentioned the word “teenager” to her, she wouldn’t know what you were talking about. Which makes it all the more amazing that she was able to capture something which was not even identified until a century and a half later.

By Monica Fairview, whose The Other Mr Darcy will be available in a matter of weeks, i.e. at the end of June 2009.
Posted by Historical Romance Author at 7:20 AM

I thoroughly enjoyed this post Monica. In my wip I am having trouble depicting the now rebellious teenager Rowena Loveday from being a self-centred brat into a sympathetic feisty heroine. Most of the time I want to throttle her and at others cry as she struggles to prove her worth. It makes me wonder what Mrs Bennett would have been like as a teenager, she was difficult enough as a mother.
Every success to you on the publication of The Other Mr Darcy.

Excellent post!! After reading it I realized that I've always thought of Lydia, Kitty and Mary this way, but never had defined it in my mind this way. Again, wonderful post!

German writer Johanna Schopenhauer (Arthur Schopenhauer's mother) makes a note of it in her autobiography, deploring the fact that there's no equally fitting expression in German.

What also always comes across for me is the way she captures sibling relationships so well.

Kate: Yes, it would be fascinating to see Mrs Bennet as a teenager! I would imagine she would come across as very annoying. Mr Bennet liked her, though. I made Mr Bennet say something in THE OTHER MR DARCY to the effect that she must have been pretty, or he could think of no other reason he would have married her.
Glad what I said resonated with you, Blarney Girl. Thanks for letting me know.
ladysusan: I'll have to look up J Schopenhauer's autobiography. I wonder what exactly the implications of "Miss in her teens" were? Fascinating. Thanks for the info.
Jan: I agree. She does wonderfully with that. Someone is thinking along the same lines as you, since there's a whole JA conference coming up in Philadelphia focusing on that aspect of her writing. It would be fascinating to attend.

I wonder what exactly the implications of "Miss in her teens" were?
]
A quick attempt of translation from German. I couldn't find an English version anywhere online. ;)

Our language can only help itself in the attempt of expressing [the term] by using paraphrases, which usually turn out clumsy and awkward.

One could compare such a Miss with a recently hatched butterfly which has just left its cocoon; which, amazed with its new pair of wings, flies away into the air, feels new amazement with every new flower it sees; flutters around every blossom in an inquisitive spirit; always thinks the scent of its latest find the sweetest, and yet this does not keep it from courting acquaintance with all the others.

This DOES sound like Lydia Bennet, doesn't it? Schopenhauer goes on:

I once was in Arcadia too! I, too, was a Miss in her teens many long years ago, was such an unreasonable, droll, slightly saucy summer bird, seeing the world through rose-coloured glasses, delighted with everything because everything was new.

Here's a translation of Schopenhauer's English and Scottish travel diaries:

They've also got some of her novels translated into French, but unfortunately they don't have her autobiography in English. :(

It's available on Projekt Gutenberg in German, though.

ladysusan,
Thank you for the helpful quotes, and even more for the translations. Brilliant! Also, thanks for pointing me to the travel diaries. I'll definitely look up Johanna Schopenhauer. Looks like she has a few insights to pass on...

Very interesting post! Jane Austen is my favorite character ever and I also like the love story!