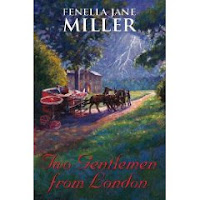 Here is the final version of my cover for the Hale book which comes out in October. As always I love it - what do you think? Below is the opening scene from the book. I hope you enjoy it enough to want to read the whole thing when it comes out.

'Miss Bentley, lawks a mussy! They're here. Young Fred saw the carriage turn into the lane not ten minutes ago.'
Annabel Bentley dropped the jar of bramble jelly she had been about place on the shelf in the pantry. 'After so long? I had thought Mama and I safe from him.' Stepping over the sweet mess on the flagstones she gathered up her skirts, calling over her shoulder as she ran. 'You and Tom know what to do; we have about thirty minutes before they arrive.'
How had he found them? They had been so careful these past years, had not even attended church or visited Ipswich themselves. Her heart pounding, she ran upstairs calling her mother.
'Mama, we are discovered. We must get organized or it will be too late.' She had hoped never to be reminded of that black time again.
Lady Sophia appeared from the south facing chamber she used for her studio, as usual she had paint streaks on her face and fingers. 'Are you quite certain, my love? I can hardly credit that monster has been able to find us.'
'Well, he has. Mary and Tom are putting on the holland covers, we have to clear your studio.'
In the beginning they had practiced this exercise several times, but as the months, and then the years, slipped by they had stopped rehearsing. However, the boxes were ready and it was the work of moments to fill them with the paraphernalia.

'Quickly, open the panel and I'll start taking things through.' Annabel tried to recall how long it was since she had checked their intended hiding place. It must be almost a year, the two secret rooms would be dust covered, but it was too late to worry about that. There was the clatter of footsteps and their servants arrived to disguise the bed chambers they had been occupying with covers.
'Miss Bentley, everything's ready downstairs, we shall have your rooms done in a trice. Fred is moving the horses, I reckon we'll be prepared in good time.'
'This room is finished; all we need is sufficient food and water for today and tomorrow. No doubt you will be obliged to offer accommodation tonight, but when he finds he's mistaken, he will surely leave first thing.'
'He'll not get a meal he'll enjoy tonight, I'll make sure of that.'
'Thank you, Mary. I cannot imagine why the three of you have stayed with us so long in this isolated place, but we could not have managed without you.'
'Bless you, miss, it's been our pleasure. You mustn't worry. If you and Lady Sophia get settled, we'll be up with what you need as soon as we've done here.'
Annabel stepped into the hidden passageway, relieved to see her mother had not been idle, the sconces were burning and she had sufficient illumination to fasten the panel behind her and to pick up one of the remaining boxes.
The passageways and narrow staircase led from top to bottom of the ancient mansion. The place had once been used by smugglers and although the exit to the beach had fallen into disuse years ago, it was still possible to get from the kitchen to the hidden apartment in the attic.
She followed the twists and turns without hesitation, it was fixed in her mind. She could hear her mother moving about ahead of her and guessed she would be setting up her easel.
'There you are, my love. I shall run back and fetch the last box whilst you check we have everything we need up here. I fear the bed linen will be damp after so long.'
Annabel didn't bother to argue that she was younger and fitter and should be the one to go back, for it would be untrue. Her mother was barely eight and thirty, and she nineteen on her last name day, they would be taken for sisters if ever they appeared together in public.
These secret rooms had been constructed when the house was built. There was no way to enter them via the attics, the only panels that opened were in the room that had been used as a studio and the boot room in the basement. She walked across to the low doors that opened onto the roof.
She pulled them back and stepped out, knowing she could not be seen from below. Brandon Hall, originally built in the reign of Queen Elizabeth, now had a false edifice making it appear what it was not. Behind the brick frontage, hidden between two chimney breasts, was a space more than large enough to walk about. She carefully removed the brick that filled the peephole.
Her throat constricted and her hands clenched. Fred had not been mistaken. Already half way down the long curving drive was a smart, black travelling carriage. They had not received a visitor since they had joined Great-Aunt Beth, nobody knew they were there. It could only be her stepfather, Randolph Rushton, and his loathsome man of affairs.
A vivid flash of lightning split the sky. She counted, had reached five, when the thunder followed. The storm they had been anticipating all day would be upon them within the hour. She prayed the river that ran parallel to the lane would not flood, the last time it had done so it had been a week before the road was passable.


Miss Bennet & Mr Bingley is now available from Amazon and all other distributors. It has been given a good review on Pemberley and is mentioned on four other Jane Austen sites.
best wishes
Fenella Miller
Posted by Historical Romance Author at 7:52 AM

I love the lightening! A very nice cover, as usual. Congratualations for the review in Pemberley for Miss Bennet and Mr Bingley. I'm going to go and read it.

David Young, who does my Hale covers, always asks what I'd like and often sends me sketches before the offical 'rough'.
I hope Hale print a full run of this book -Ghosts of Neddingfield Hall was sold out before it was published!!
Fenella

Very dramatic with the lightening!