Persuasion, the Cobb and Louisa Musgrove 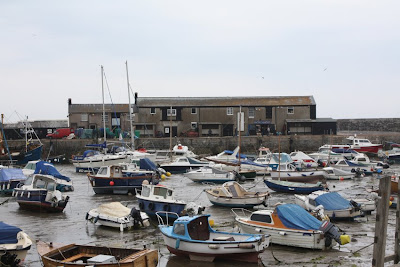 I've been to Lyme Regis very recently - I always love going because I know it is a place that Jane Austen visited often and really took to her heart.

...the principal street almost hurrying into the water, the walk to the Cobb, skirting round the pleasant little bay, which in the season is animated with bathing-machines and company; the Cobb itself, its old wonders and new improvements, with the very beautiful line of cliffs stretching out to the east of the town, are what the stranger's eye will seek; and a very strange stranger it must be, who does not see charms in the immediate environs of Lyme, to make him wish to know it better. The scenes in its neighbourhood, Charmouth, with its high grounds and extensive sweeps of country, and still more its sweet, retired bay, backed by dark cliffs, where fragments of low rock among the sands make it the happiest spot for watching the flow of the tide, for sitting in unwearied contemplation; the woody varieties of the cheerful village of Up Lyme; and, above all, Pinny, with its green chasms between romantic rocks, where the scattered forest-trees and orchards of luxuriant growth declare that many a generation must have passed away since the first partial falling of the cliff prepared the ground for such a state, where a scene so wonderful and so lovely is exhibited, as may more than equal any of the resembling scenes of the far-famed Isle of Wight: these places must be visited, and visited again to make the worth of Lyme understood.. 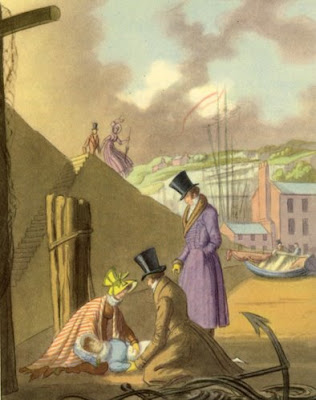 Part of Jane's book Persuasion was inspired by the town - the dramatic turn of events when Louisa Musgrove jumps from the Cobb is a turning point in the book for our heroine Anne Elliot.

There was too much wind to make the high part of the new Cobb pleasant for the ladies, and they agreed to get down the steps to the lower, and all were contented to pass quietly and carefully down the steep flight, excepting Louisa: she must be jumped down them by Captain Wentworth. In all their walks he had had to jump her from the stiles; the sensation was delightful to her. The hardness of the pavement for her feet made him less willing upon the present occasion; he did it, however. She was safely down, and instantly to shew her enjoyment, ran up the steps to be jumped down again. He advised her against it, thought the jar too great; but no, he reasoned and talked in vain, she smiled and said, "I am determined I will": he put out his hands; she was too precipitate by half a second, she fell on the pavement on the Lower Cobb, and was taken up lifeless! There was no wound, no blood, no visible bruise; but her eyes were closed, she breathed not, her face was like death. The horror of that moment to all who stood around!

Far from running up these steps myself I found it quite terrifying - descending from the top is the scariest way down especially when there is a gale howling! Walking along the top of the Cobb is exhilarating but even in fine weather there seems to be a good chance of getting blown off - not for the faint hearted! 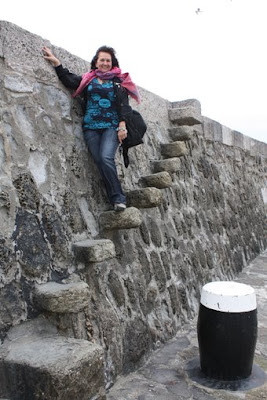 RUN???? Down those steps??? I can feel my ankles turning even as I look at them!

Those steps look worse than any I've seen in the movie versions! Are there a number of them?
I guess the walk along the top would be quite the reward but coming down?

Thanks for the photo and some Jane for the day!

There are several sets of steps but these were definitely around when Jane was alive - I'm pretty sure they are also the ones used in the Amanda Root adaptation from 1995 - it must have been a stunt girl running up and down I'm sure!

Perhaps Louisa didn't fall -- a strong gust pushed her down...

Lovely, Jane. I just wonder how they managed wearing long gowns - they would have acted more like sails.........