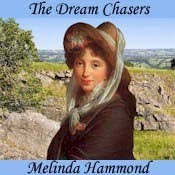 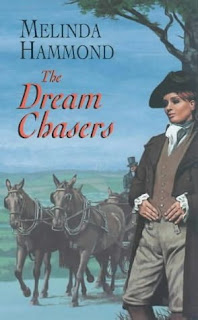 My lovely romantic comedy, The Dream Chasers has a new life and a new cover with Regency Reads. When I re-read this book again prior to e-publication, I realised why I love it so much. It is a sparkling romance with our heroine tumbling from one scrape into another, but finally coming up with a solution to suit everyone! You can find it at http://www.regencyreads.com/
The new cover is on the right: which one do you prefer? The original cover does show my heroine in boys' clothing, and her hero's carriage approaching, BUT in the story she is hiding in a tree at this point! As for the new cover - the costume is about the right period (although my Eustacia is a red-head), also the story moves from Bath to London, and the background reminds me more of Derbyshire. But hey-ho, they say one should never just a book by its cover.
"All the required ingredients of a Regency romance… skilfully written" (Historical Novel Society)
When Vivyan Lagallan decides that it is time to settle down, Fate has other ideas, and one last adventure literally drops into his arms in the form of the spirited Miss Eustacia Marchant. Eustacia is determined to marry Rupert Alleyne, while Vivyan is engaged to the beautiful and highly respectable Helen Pensford. Into this volatile mixture comes Vivyan's adventuring colleague Nathan MacCauley, intent on making a respectable alliance. As the delightful heroine tumbles from one scrape into another, the ensuing tangle threatens the happiness of them all, unless Eustacia's final, audacious plan succeeds! In this enchanting romance we meet again the characters from Melinda Hammond's earlier novel, Autumn Bride as well as delightful new characters in a plot that carries the reader at breathtaking speed to its final, surprising conclusion.
This book continues the story of Vivyan Lagallan, a secondary character from an earlier book, Autumn Bride: when I re-read The Dream Chasers I found myself thinking that it might be fun to follow the rogue, Nathan MacCauley, to find out just what happened to him!
Melinda Hammond
Posted by Historical Romance Author at 1:30 AM

This sounds brilliant, Melinda. Did you do another edit before re-releasing?

Not really, I just checked it for errors - and that was quite difficult because I kept getting immersed in the story!

I love The Dream Catchers, Melinda. It's very much in the Heyer style, with all kinds of twists and turns, and I really enjoy the humour. Glad to see it's taking on a new form.