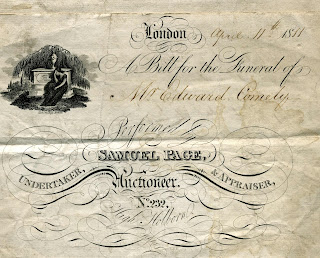 My last post was about a lawyer’s detailed expenses claim for a journey to London which several people said they found interesting, so here is a much more gloomy, but still fascinating bill – for the funeral of Mr Edward Comely.

Edward Comely was buried in the Gray’s Inn New Burial Ground on April 16th 1811 after dying on the 11th in the parish of St Andrews Holborn Hill, London. His funeral was “performed” by Samuel Page, Undertaker, Auctioneer and Appraiser of High Holborn.

Given the short time at his disposal, Mr Page did Edward Comely proud. He was buried in “A strong Elm coffin with fine Black Serge close drawn with double rows of the best Japanned Nails, a Double Flowered Plate with Urn and large escutcheons with Wrought Handles.” That cost £5.10s

For providing a Mourning Coach and hearse, each with a pair of horses, the charge was 12s but in addition to that there was a 2s for the coachmen’s cloaks and 10s for hatbands and gloves for the men.

“2 Porters in proper dresses to stand at the door and walk in Procession” cost 12s with 10s for their hatbands and gloves. The four men who carried the coffin were charged at a rate of 10s and they were equipped with mourning cloaks, hatbands, hoods and scarves. One of Mr Page’s men attended the funeral, suitably garbed (at extra cost) and the gravediggers charged 5s.

At a time when a butler in a great house might earn £60 to £80 and a footman £25 to £35 a year, you could get dead drunk on gin for 2d and pay 6d for a place in the pit at the Opera a bill of £18 18s 6d suggests that Mr Comely must have been a man of comfortable means – a merchant perhaps. I wonder if his executors queried that £4. 7s for the service and "etc" though - I'd be very suspicious!
Posted by Historical Romance Author at 5:00 AM

Gosh that is fascinating!

This is excellent, Louise! Do you really suppose the bearers had brand-new hatbands and gloves? Wouldn't they have already had them?

I think the executors got *charged* for new hatbands etc - but I bet they got recycled a lot!