In the steps of the Romantics! 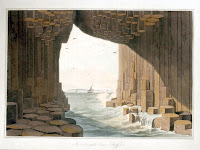 On my recent trip to Scotland I did some historical sightseeing with a difference! On a beautiful sunny and calm day we embarked on a small fishing boat for a trip to the island of Staffa.

It took about an hour to reach Staffa from Mull, where we were staying. The island is uninhabited and is now in the care of the National Trust for Scotland. It was originally formed 60 million years ago as a result of violent volcanic activity. Staffa’s magnificent basalt cliffs, which resemble enormous organ pipes, were created when liquid rock cooled and hardened into columns. The sea caves for which Staffa is also famous were formed when the sea wore away the soft volcanic ash at the base of the columns. The name “Staffa” comes for an Old Norse word meaning wooden building staves which suggests that like modern tourists, the Vikings also marvelled at Staffa’s basalt columns.

Staffa was farmed during the late 18th century and the ruins of several stone structures on the island suggest that people either lived there permanently or seasonally. The island was first brought to the attention of the wider world in 1772 by the famous botanist Joseph Banks, who wrote: “Compared to this what are the cathedrals and palaces built by men! Mere models or playthings, imitations as his works will always be when compared to those of nature.” It was Banks who coined the name “Fingal’s Cave.” This was a reference to the then fashionable Macpherson’s Ossian, the tale of the great deeds of the Gaelic hero Fingal, a bestselling epic poem, which was later proved to be a forgery. The poem was discredited but the name of Fingal’s Cave stuck!

Banks’s “discovery” of the island coincided with the spread of the Romantic Movement across Europe with its emphasis on wilderness, emotion and natural splendour. Staffa soon became one of the “must-see” sights of Scotland. Samuel Johnson and James Boswell attempted to land on Staffa during their tour of the Hebrides in 1773 but were beaten back by heavy seas. Fingal’s Cave went on to become a place of pilgrimage for the Romantics: William Wordsworth, John Keats, Sir Walter Scott, JMW Turner and Felix Mendelssohn all visited and were moved to write, paint or in Mendelssohn’s case create a piece of music inspired by the island. The island proved so popular with visitors that in the 19th century a romantic-style folly was built to provide some shelter and a place to rest and eat. This is in ruins now but it’s possible to imagine Regency and Victorian visitors huddled within its walls when the weather turned stormy and I did think what a wonderful setting it would make for a book!
We followed the walkway along the cliffs and entered the cave, which is a hugely impressive 250 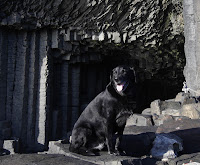 feet long and 70 feet high. The sound of the sea crashing on the rocks does indeed mimic music and it was an awe-inspiring place. This photo shows Monty, our intrepid sea-dog, admiring the view outside the cave! Unfortunately, by the time we got back to the boat, the wind had changed and the tide was creating big waves that were driving onshore. We had to choose our moment to leap back into the boat, arguably the most exciting part of the trip! All in all though it was worth it to see the majestic splendour of Staffa’s cliffs, to stand in the spot that had inspired the poets, writers and musicians of the Romantic Movement and to hear the sound of the sea that had suggested to Felix Mendelssohn the music of the Hebrides Overture.
Posted by Nicola Cornick at 9:47 AM

How wonderful, Nicola. they got about a bit, those Romantics, didn't they?

Looking forward to reading about the folly in one of your books-to-come :}

LOL, Jan, they certainly did! If I write another Scottish-set book perhaps my characters could take a boat trip to Staffa...

Monty looks extremely dashing, Nicola!
And such a romantic setting - i do envy you the trip