This is my first post as a regular contributor to this blog, so there's a little new, a little old.

On the new, I've started a new book! Normally, that's not quite such an event. Usuall 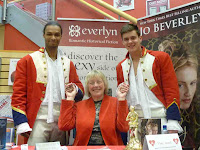 y, when people ask (as they always do) "So, are you writing a book at the moment?" I answer, "Always." That hasn't really changed. In the process of moving back to England from Canada, I've finished one book, begun and completed another, and written a short novella. None of it has quite been in my "zone", however, which is where I like to write, especially over the earlier part of November when I was rambling around England in the company of dashing young men in regimentals. 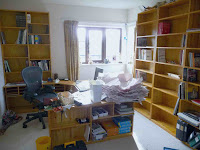 one? In my study, at my old DOS computer, sitting in my Aeron chair (all shown here part way through unpacking) amid a generally stable and peaceful life.

So when I say I started a book, I mean all of the above, and with a good chance of it continuing. Believe me, my creative process is chaotic enough; I don't need any extra rattling!

The new book is a Georgian. It's not directly connected to my Malloren books, but characters from other books might turn up. I have no idea. I fly into the mist, ie -- I don't pre-plot my books.

I've been blogging for years in a couple of places, and one is my Blogger spot called Minepast, where I put any tid-bit of history I stumble across. I never used to know what to do with them. Now I do.

Here's an entry from a while back.

I was researching one of my Regency-set books, The Rogue's Return, one that started out in Canada. In seeking information about trans-Atlantic travel in 1816 I came across the diary of Laurent Leclerc, a young deaf man, who sailed from France to America and kept a diary in English in order to improve his use of the language. I found some of the events startling. So did he!

"I have forgotten to say in the beginning of my journal that we have in our ship different species of living animals for our daily nourishment, among which are six hogs, several ducks and several cocks and hens. We have also some canary birds to tickle the ears of the passengers by the agreeable sound of their singing. Ah well!! After dinner I was told that one was now going to kill a hog.

In truth, I saw two strong sailors seize the poor animal by his feet, throw him down and thrust a large knife in his neck. The blood flew and gushed-such a spectacle caused too much pain."

On another date, he wrote: "The interior of our ship abounds with mice. Now and then we see some running here and there. From time to time we kill some, and every day we hear them cry in their holes. They make a horrible ravage among our effects. They gnaw our books, papers, linen, clothes, provisions, etc. We have a cat, it is true, but she is so little that she cannot make war on them, and even if she were larger she would not know how to catch them, because she is spoiled and because she is nourished deliciously. She thus loses the taste of the most of the mice. Some one lately presented her with a dead mouse which she smelled and disdained. By way of retaliation our ducks are more warlike and courageous. We once threw a dead mouse upon deck and they pounced upon it, tore it in pieces, disputed over it and endeavored to eat it. And another time they swallowed, in a trice, several little mice which were put before them. I was extremely surprised at seeing that and I said that since ducks eat mice dead or live, doubtless we also eat mice when we eat ducks. I requested, therefore, that I should no more be served duck at dinner."

I love these glimpses into lives of the past. Do you know any unusual on-line diaries you could share?

Hi, Jo, nice to see that you will be a regular contributor here.

Amazed at the ducks/mice story!

Following JoBev here. It's fun to continue reading about your travel adventures as you settle into your new home.

Welcome, Jo, lovely to have you here! Love the landscapes, hope Whitby proves as inspirational as Canada for you. Also, I do sympathise with you having to travel around the country with two scarlet-coated gentlemen: the things we do for our art :)

Loved your first post, very interesting and I look forward to more!

Nice post. Thank you for the information. The blog is very informative and beautifully described Keep up the good. cheap luton airport parking, meet and greet at Luton, click here for more information.