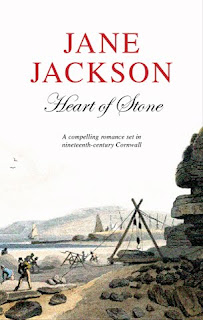 When a new book comes out it's always a frantically busy time. We need to let the public know the book is available through different types of publicity: this blog for example. Because I write Cornwall-based historical romance a press release to the local weekly papers and glossy monthly and bi-monthly magazines is another opportunity. A copy also goes to BBC Cornwall. This paid off particularly well a week ago when I was invited onto the afternoon show to do a live 15-minute interview. Because it was going out live I spent the entire morning preparing - writing notes about the characters and the background (a granite quarry inherited by my heroine and a badly scarred hero who manufactured gunpowder.) I included a page from the book to read out as a "taster" and some bits of information that I found interesting and thought listers might too.
The interviewer was terrific. When he phoned me to set up the interview he apologised for not having read the book. Actually, I hadn't expected him to: so many interviews, so little time. Once we were on air he asked me about my life as a writer and about the background to this story. Then I read the page. All too soon my time was up and I hadn't had an opportunity to tell him about the origins of saltpetre - one of the three constituents of gunpowder. From the late Middle Ages until the late C19th this vital ingredient was obtained from beneath dungheaps or from urine-soaked straw that was kept wet with more urine and left to rot for up to a year. The resulting crystals were washed out of the straw with water which was then evaporated, leaving behind crude saltpetre crystals. These would be further refined before being made available to the gunpowder makers. Because of the source of the material, saltpetre-makers were called Devil's Men or The Dark Men. Coming across facts like these is what makes research so fascinating.

Jane Jackson.
Posted by Historical Romance Author at 7:59 AM

Excellent post, Jane. And much food for thought re interviews. Thank you.

Thanks, Jan. Your comments are much appreciated as I'm trying desperately to catch up with the wip after the time spent on publicity.