At the Court of King Louis Fifteenth 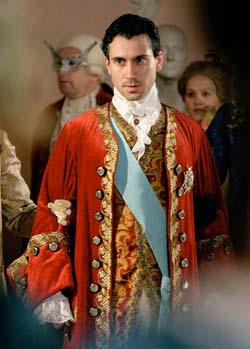 As if we didn’t know it, historical romance is hot! Following swiftly on from the latest Sharpe, television embraced historical romance again last night in the unlikely context of Doctor Who. No doubt Doctor Who purists were shocked to see the Time Lord enjoying a passionate kiss with Madame De Pompadour but for historical romance fans like myself the combination of time travel, love and luscious locations proved to be a winning one. The costumes, such as the one worn here be King Louis XV, were gorgeous, although the actress playing Madame de Pompadour admitted that her dress was a hand me down from the film The Madness of King George. The producer commented that their intention had been to create an opulent setting and worry less about historical authenticity - he was sure that someone would be in touch to say that they had got the fashions of 1750 incorrect and that coats were two inches shorter in that year!

In an interview later the writer admitted that he was a romantic who enjoyed writing about relationships in whatever context and he gave a useful piece of advice for aspiring screen-writers: always provide a reason to stop people turning off, which could be translated for authors as “always give readers a reason not to put your book down!”

Tricia Tait of King’s College writes of Madame de Pompadour: Throughout history, the traditional roles that subordinated women passed from generation to generation. Although most women faced a life of limited opportunity, a few were capable of surpassing the traditional roles and gaining power and influence. One of these women was Jeanne-Antionette Poisson, who in the eighteenth century, rose beyond her class status and gained title of maitresse-en-titre to Louis XV, King of France. She was able to remain the King's mistress between 1745 and 1750, and remained powerful as the King's confidante until her death in 1764.

Yes, wasn't it fantastic? But then I always love a mix of history and fantasy.

It's an interesting point about the dress being one of the ones used in The Madness of King George. It brought it home to me that programme makers don't have unlimited budgets, and that they might want to make the programme both opulent and 100% accurate, but might have not the money to do so.

That's one of the good things about being a writer. We don't have to worry about budgets, so we can give our characters all the clothes, jewels and carriages we want.