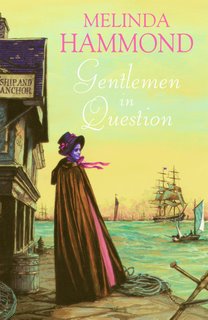 I have just received the cover picture for my latest book, Gentlemen in Question, which will be published in June. It's always exciting to have a new book coming out and this one is no exception, especially since it is not just a romance, but a mystery, complete with the odd murder or two!

The story begins at the harbour in Rye, Sussex on a blustery November day in 1792. Madeleine Sedgewick is meeting her cousin, one of the many French aristocrats forced by the Revolution to leave their homeland. Madeleine's life so far has been uneventful, but with the arrival of the Comte du Viviere she finds herself entangled in a dangerous web of intrigue and suspicion and she has to decide if her cousin is a victim or a villain.

The question that haunts Madeleine is, how can she tell? There are two men – both of them suave, urbane and good-looking (this is a romance, after all): one is her cousin, the Comte du Viviere, who has left his homeland and everything he knows, fleeing from the terror of the French Revolution. The other is Beau Hauxwell, a rich English gentleman of fashion. Madeleine likes them both, but how is she to know which one is to be trusted?

I had great fun writing this book, especially since I had not one but two handsome men to play with (figuratively speaking, of course!) and isn't it odd that we do like our villains to be attractive, at least in fiction. And there is an added bonus: one of the gentlemen in question is French, and there is something soooo sexy about that French accent……..

Melinda Hammond
Gentlemen in Question is published by Robert Hale Ltd in June 2006.
Posted by Historical Romance Author at 10:17 AM