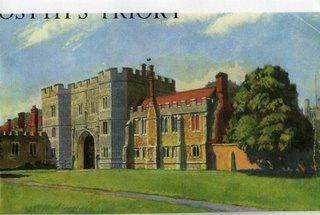 Last week I was lucky enough to be allowed to join a private party that had a conducted tour of St Osyth Priory the setting for my next Regency for Robert Hale.
This Priory is the best surviving example of mediaeval architecture in Europe and the site has the greatest number of listed buildings in England. At one time the incumbents of the Priory owned the whole of the Tendring area. St Osyth, no more than a small village now, was, in the 18th and 19th century, the centre of commerce and industry. The Sun Insurance company kept their fire wagons there; the fire mark is still visible on the gatehouse. St Osyth always had a doctor living in the town as well. It is a shame the Priory is no longer open to the public as it is well worth a visit.
Also last week I heard that, A SUITABLE HUSBAND, has been sold to Thorpe, to appear in large print in 2007, which is great news. I finally received the proofs for my next book, A DISSEMBLER, which is scheduled to come out in August. Things seem to be running later than usual at Hale, but they still think they can publish as planned.
Fenella Miller
Posted by Historical Romance Author at 8:22 AM