Another Regency actress - and playwright 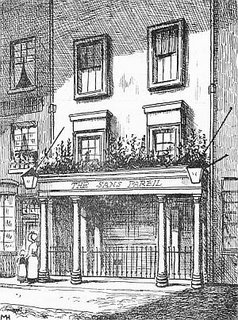 Nicola's post last week about the remarkable Regency actress Louisa Brunton reminded me of another Regency actress I'd come across during my research for a theatre scene in The Lady Soldier. I discovered a woman who sounds quite remarkable in terms of what she achieved in her career in the theatre - Miss Jane M. Scott, daughter of the founder of the Sans Pareil theatre (now The Adelphi), John Scott, a merchant who had made his fortune with a blue washing dye.

As I researched the history of the Sans Pareil I came across reference after reference to Miss Jane Scott as an actress and also as the writer of numerous pieces, plays and comic operettas each season from the theare's opening in 1806 and into the second decade of the 19th century. Who was this women who was so successful a playwright in her time? I tried to find out some more about her life and found this very difficult. I was also unable to find any portrait or likeness of her. Then I stumbled across the reason why:

"Miss Scott developed strong symptoms of [the] dramatic disease and though her extraordinary talent was undoubted by her father and friends, it was delicately hinted that the greedy public not only expected intrinsic merit for their money, but also that it must be hallowed o'er with beauty to secure the first impression. Now Miss Scott, in addition to some natural defects had the smallpox and rickets unfavorably, but as genius comes in all disguises, she really had great talent, both as an actress and a writer."
(The Theatrical Observer, December 11, 1844).

Here's a very short excerpt from The Lady Soldier where I was able to reference Miss Jane Scott and, in a small way, give her a little importance back in her own time:

‘What is it we are seeing at the theatre this evening?’ Jem asked in the carriage as it clattered over the street cobbles.

‘A play,’ Tony replied his voice dry as a biscuit, his head lolling against the squabs.

‘Il Giorno Felice, or in English, The Happy Day,’ Lady Ardenbrooke said. ‘It is a comic operetta.’

Jem spluttered at the irony of it and fanned herself quickly to cover up her reaction.

‘You don’t have to watch the play, Jemima,’ Tony drawled as he stared out of the window. ‘Simply sit and look pretty for a few hours. This evening’s offering is written by a woman - more’s the pity! The sooner they get the new theatre opened at Covent Garden, the better. It’ll be some fustian pantomime-’

‘Written by Miss Jane Scott,’ Lady Ardenbrooke interrupted and rapped her fan on the door handle. ‘I have seen several of her works. She is an accomplished playwright. Tony, you’ve not been in London for years, do be quiet if you’ve nothing useful to say.’

Kate, the beginning of my actress-by-accident unsold :( Regency is set at the Sans Pareill and also has Miss Jane Scott as a walk-on part. The Adelphi Calendar of Performances web page gives listings of all the items produced every night of every season and is a tremendous theatrical resource.

PS - the first chapter can be read at my website

Hi Jan -
Yes, I found that too. There is also a copy of the text of one of her plays online - Whackham and Windham, The Wrangling Lawyers (1814).