Yesterday I had a pleasant surprise in my inbox - an email with a link to some super photographs. Some I have reproduced here but you can see the full set at BBC News. (Laura V – look away now.)


Last weekend around 4,000 military history enthusiasts from 23 countries gathered in the Czech Republic in the cold December snow to re-enact a battle in front of around 30,000 spectators – the Battle of Austerlitz.

Two hundred years ago this year Admiral Nelson enjoyed his great victory at sea at the Battle of Trafalgar, but 1805 was also the year of another great military victory – that of the Battle of Austerlitz, regarded as one of Emperor Napoleon Bonaparte’s greatest military triumphs.

December 1805 was cold and snow-laden too. Napoleon had seized Vienna and was now keen to bring on a decisive victory against the allied forces of Britain, Austria and Russia. He was outnumbered but he tempted the amassed Austrian and Russian forces into spreading their lines by luring them to attack his right flank. He then struck hard at their centre, splitting the allied forces. The allies surrendered and the peace treaty gave France 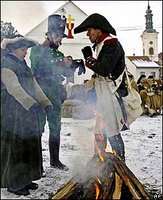 almost total control of Italy and established a French protectorate over most of Germany.


With acknowledgments to BBC News for photographs and journalism.
Posted by Kate Allan at 1:01 PM

Thanks for the warning Kate! I haven't followed the link to the BBC, but the photos posted here are very pretty (like the toy soldiers on a Christmas tree). Gloomy, Eeyorish being that I am, though, I can't help but think that the snow (and the uniforms) wouldn't have looked so pristine by the end of the battle.

Note to self: find some soldiers for my Christmas tree this year.

Kate, they're selling new toy-soldier tree decorations in the Oxfam shop near me (along with lots of other Christmas decorations). They're not in the online catalogue, though. Still, even if you can't find the soldiers, Oxfam do sell nice chocolates.