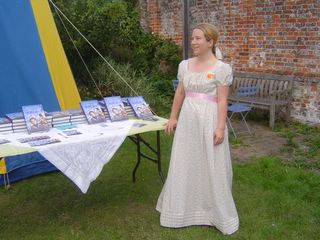 My first book, The Lady Soldier, came out, and went to a second printing. Later in the year, the same publisher, Robert Hale Ltd offered me a contract for my Regency-set romantic comedy, Perfidy & Perfection.


F. A. Thorpe offered for large print rights for The Lady Soldier, and I'm looking forward to seeing the book in its new format in 2006.

In August, I donned period costume and read from The Lady Soldier at the Jane Austen Fayre at Down Grange in Hampshire.

I gave a practical workshop on 'The Six Senses of Writing' to Watford Writers Circle and in September, I spoke to York University London Alumni Group about being a York History graduate and an author.

In May, I appeared at Lincoln Book Festival discussing The Lady Soldier and gave a practical writing workshop on 'The Six Senses of Writing' to Verulam Writers Circle in St Albans.

Writing Magazine also featured me as a new author in 2005 - a good year! 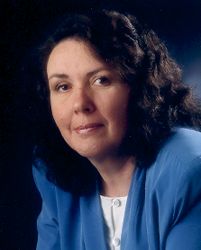 This has been a successful year for me. A Regency Invitation, published by Harlequin Historicals®, came out in November. It consists of three stories, all set at Lyndhurst Chase, the hunting box of Major Anthony Lyndhurst.
If you are interested to find out how three authors managed to collaborate in such detail when two were in England and one was 12,000 miles away in Australia, we created a blog of the emails we exchanged. It shows the detailed process of devising the outline plot, the characters and the setting. It shows how we went about writing each other’s characters and ensuring that they still rang true.

You can find the blog by clicking here

Be warned, though! It’s quite long and, to make sense of it, you’ll probably need to start with the oldest posts first. If you visit the blog, do let me know what you think.

I was delighted that A Poor Relation, originally published in the UK in 2001, was reissued in November 2005, in Volume 5 of The Regency Lords & Ladies Collection published by Mills & Boon®. 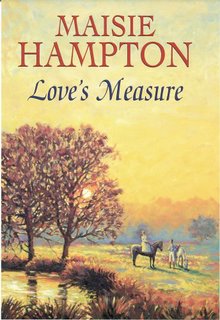 This was a good year for me. Love's Measure, my second Regency romance, came out in May.


I also discovered that it was to become an audio book, which will be released in January 2006. It's an unabridged single-voice reading by Christopher Scott, and will come out with Soundings (ISIS publications)

2005 was an excellent year!
A Regency Invitation came out in the US in November 2005 from Harlequin Historicals. The three linked novellas were set around the House Party of the Season and featured stories by Elizabeth Rolls and fellow blogger Joanna Maitland!


Regency Scandal
Lady Allerton's Wager and The Notorious Marriage were reprinted in one volume in the UK in October.

I was also thrilled to have a short story, A Season for Suitors, in the HQN Christmas Anthology, which came out in October.
Over the last few years, many readers had asked me about Sebastian Fleet, who was a character in The Earl's Prize and Wayward Widow. When would Sebastian finally meet the woman of his dreams?
I am very happy to report that A SEASON FOR SUITORS is Sebastian's story - at last! 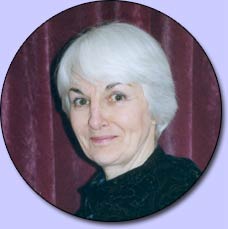 The large print version of my novel, Tide of Fortune came out in the autumn.

I have sold two new books to Robert Hale Ltd. The first is Dangerous Waters, and the second is Devil's Prize.


We hope 2005 was a good year for you. Why not tell us your highlights? We'd love to hear about your best moments from 2005.
Posted by Historical Romance Author at 4:11 PM

Get 50% off on Winsor Pilates.