We've had hundreds of entries to our Regency Authors UK Christmas competition, and we're delighted to announce the lucky winner picked at random, who will be receiving a parcel with the following:

A signed copy of Tide of Fortune by Jane Jackson

~ When Karenza Vyvyan's estranged father returns to raise the ransom needed to free his wife and elder daughter held hostage in Tangier, he demands Karenza sails back with him, but the captain of the packet ship, Kestral, is the man who broke Karenza's heart. ~

A signed copy of The Earl's Intended Wife by Louise Allen

~ Hebe Carlton had no idea of her own charm until Major Alex Beresford arrived on Malta. She made no attempt to cast out lures but his attentions made Hebe blossom. And then a letter arrived, telling that his proposal of marriage, made before he had ever met Hebe, had been accepted at last. ~

A signed copy of The Lady Soldier by Jennifer Lindsay 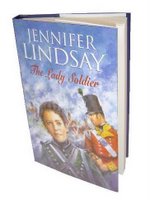 ~ Jem Riseley is the perfect soldier in Wellington's army: brave, skilled and daring but also a gently-born lady. A battlefield promotion lands her with the problem with Captain Anthony Dorrell who knew her as a lady. She must convince him she's the man she seems and battle her rekindled desire for him. ~

A copy of Maid of Honour by Melinda Hammond

~ Lucille Chambers reluctantly agrees to act of chaperon to her sister but her attempts to protect her bring her into conflict with the notorious Dominic Vanderley and she finds it's her own honour which is threatened. ~

A copy of The Midwillow Martyrs by Janet Mary Thomson
~ Martha Cavanagh, the minister's daughter is experiencing the first pangs of love but the object of her affections, Gabriel Lawless, is a rebel and becomes involved in treason. ~

~ A set of official Pride and Prejudice movie postcards ~

~ 'My heart belongs to you' keyring ~

Thank you to Louise Allen, Jane Jackson, Fenella-Jane Miller and Melinda Hammond who helped me put together the prizes for our inaugural competition.
.
So now, drum roll please... trrrrrrrrrrrr....
.
The lucky winner is:
Sheena Maclellan
.
Well done, Sheena, and thank you to everyone who entered. Look out for more competitions on the Regency Authors UK website in the new year!
Posted by Kate Allan at 10:49 PM