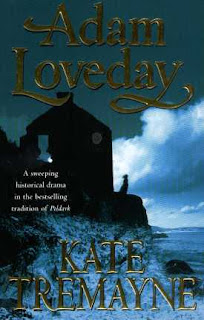 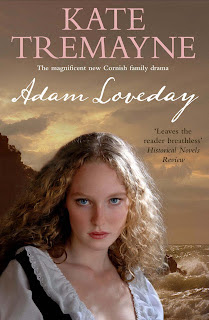 I am thrilled that due to the increasing popularity of the Loveday Series the first book ADAM LOVEDAY is being re-issued in February with a fabulous new cover.Shown here with the sultry blonde woman on the front. The novel was first published in 1999 and has been in print ever since. This book introduces the family of three sets of cousins their loves, passions, rivalries, conflicts and adventures.

Review: 'Rich in drama and passion, with the atmosphere and flavour of eighteenth-centure Cornwall, ADAM LOVEDAY...is a story of family relationships that transcends time, and heralds the emergence of an exciting new storyteller' North Cornwall Advertiser,


The original cover shows the a woman's silhouette and the engie house of a tin mine. Which do you think is best?
More information on the series on my website.click here
Kate Tremayne
Posted by Historical Romance Author at 9:39 AM

I like the blue one. It's more haunting and draws a person in with the promise of a mystery.

I like both covers. The woman is eye-catching and the original cover is brooding. Maybe if they redesign the cover again they'll put Adam Loveday on it. Some eye candy wouldn't hurt!

The book cover was updated to fit the new look of recent covers of the series. I did ask for Adam to be put on the cover which seemed the obvious choice. I also suggested him emerging from the sea in a wet shirt but in the publishers wisdom... they decided to put the devious fortune-huntress Meriel on the cover who set out to snare the heir to the estate. Kate Tremayne

Adam in a wet shirt would have been perfect!

I like the new cover, Kate. If I were in a bookshop and saw it, I would certainly pick it up and buy it.