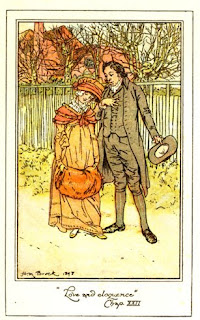 Jane Austen worked on a very precise calendar for her novels. In Pride and Prejudice the story takes place over a year and a couple of months. Several Austen scholars have attempted to place the action into a calendar, and although there are disputes about which particular years Jane was writing about, it is possible to work out how events unfold from Jane's writing. So what was happening in Pride and Prejudice on November 30th? Elizabeth Bennet had very recently refused a proposal from her cousin, the clergyman Mr Collins, but someone else is determined on having him! The following is taken from the book.

...but Charlotte's kindness extended farther than Elizabeth had any conception of; - its object was nothing else than to secure her from any return of Mr. Collins's addresses, by engaging them towards herself. Such was Miss Lucas's scheme; and appearances were so favourable, that when they parted at night she would have felt almost sure of success if he had not been to leave Hertfordshire so very soon. But here she did injustice to the fire and independence of his character, for it led him to escape out of Longbourn House the next morning with admirable slyness, and hasten to Lucas Lodge to throw himself at her feet. He was anxious to avoid the notice of his cousins, from a conviction that if they saw him depart, they could not fail to conjecture his design, and he was not willing to have the attempt known till its success could be known likewise; for though feeling almost secure, and with reason, for Charlotte had been tolerably encouraging, he was comparatively diffident since the adventure of Wednesday. His reception, however, was of the most flattering kind. Miss Lucas perceived him from an upper window as he walked towards the house, and instantly set out to meet him accidentally in the lane. But little had she dared to hope that so much love and eloquence awaited her there. 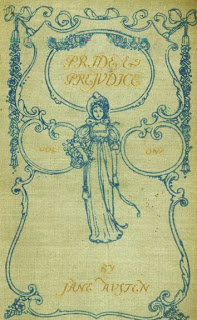 The whole chapter needs to be read to really enjoy Jane's wit, but it always makes me laugh to think how quickly a man who declared his passion for Elizabeth just two days before could transfer his affections with 'much love and eloquence'.

Here is a link to Ellen Moody's Pride and Prejudice calendar which I'm sure you will find very interesting.

Jane Odiwe
Posted by Historical Romance Author at 7:51 AM

What a great post. Mr. Collins's two proposals, and many other events, are recorded in "A Year with Jane Austen"--a calendar for 2009 created and sold by the JASNA-Wisconsin Region. It's on the JASNA web site:
http://jasna.org/merchandise/wisconsin.html

Thank you Marsha, that sounds like an interesting link!

Thank you for sharing that link!