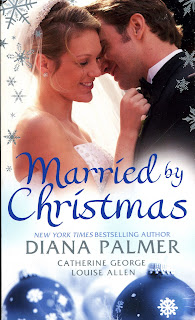 My latest story is out this month, a Christmas novella in the Married by Christmas volume.
Lady Rowan Chilcourt is appalled to find her meek friend Penelope Maylin about to be pressured into a match with the sinister Earl of Danescroft. Unbeknownst to her, the earl’s friend Lucas Dacre, Viscount Stoneley, is equally appalled that his friend should be contemplating marriage to such a mouse.
Great minds think alike and Rowan and Lucas find their way below stairs at a Christmas houseparty as lady’s maid and valet, each set on thwarting the marriage above stairs. Masquerading under the mistletoe is fun - until they realise that they are falling in love, and the object of their desires is utterly ineligible.
Here is the scene as they arrive at Tollesbury Court and Rowan, masquerading as lady’s maid Daisy Lawrence, first sets eyes on Lucas.

It was important to remember one’s place. Miss Maylin’s dresser clutched the morocco jewel case to her midriff and stood amidst the shabby valises and the old trunk that made up her mistress’s luggage. In front of her the dressers serving Lady Meredith Hughes and the Honourable Miss Geraldine Mather were already supervising the footmen. The impressive sets of matching luggage in their care were carried up the stairs to the guest bed chambers with respectful attention.
They had arrived after she had, but here at Tollesbury Court, as everywhere in polite society, servants took the precedence accorded to their employers. Miss Penelope Maylin was very far down the social ladder indeed, which meant that her dresser waited with patience until her betters were attended to.
Fires blazed in hearths facing each other across the flagged floor at the other end of the vast baronial hall. You could have roasted an ox in either, the dresser calling herself Daisy Lawrence thought, but at this end of the chamber Cook might safely store the evening’s ices and jellies with no fear of them melting. Her toes in their jean half boots were frozen and she could only be thankful that she did not suffer from chilblains. Yet.
Between the fires the guests were being greeted by their hosts and passed on to the care of the Groom of the Chambers who was organising footmen to lead them to their rooms. It all took time and a knot of people formed between the hearths while they shed cloaks and muffs and chatted amongst themselves. There too, rank was plain. Miss Maylin stood uncomfortably close to the heat, too meek to dodge around the formidable bulk of an older lady who was determined to get as close to her hosts as possible.
Penny – Miss Penelope, Daisy corrected herself - was roasting, she was freezing, and at this rate she was not going to be upstairs in time to have anything unpacked by the time Miss Penelope got to her room, desperate for a change of clothing and a cup of tea. On top of that, hairpins were sticking into her scalp, her head ached from the severity of her braided hairstyle and she was as badly in need of that tea as her mistress. But it would surely be her turn next: the other women were vanishing upstairs, dressing cases in hand, without a backward glance at their humble colleague.
There was a stir near the front door, another draught of icy air around Daisy’s ankles and footmen were bearing down on her with yet more luggage. Shiny, expensive luggage. Lots of it. Drat. Fuming she stood aside to let all six of them past. And sauntering along in their wake, a handsome dressing case in hand, was an individual that Daisy had no hesitation as recognising as a very superior valet indeed.
He was tall, he was dark, he was lean and he moved, not like a man who spent his life polishing boots and arranging neck cloths, but one who was at home in the saddle. He was unsmiling, his regular features handsome enough if you liked that sort of thing, she thought critically, watching from the side of the stairs. Then he saw her. Daisy frowned as a pair of deep blue eyes swept over her from head to foot in a comprehensive and very male assessment. Impertinent wretch! Her lips were parted as she almost spoke the set-down aloud, and then, in the nick of time, she remembered who and where she was.
Her teeth snapped shut, catching the tip of her tongue painfully. Eyes watering, Daisy stood in fulminating silence as the valet passed. And then he winked at her. Nothing else on his face moved except for that one lid and then he was vanishing up the stairs, long legs taking them two at a time.
She had just been winked at by a valet. A valet! It was the outside of enough. And this would be just the start. She had half a mind to –
‘This all there is then?’ Six foot of liveried footman was standing at her elbow. ‘Where’s yours?’ She pointed to a pair of even more battered valises. His lip curled. ‘Right then. Jim, you take those up to Miss’s room in the North turret and we’ll take the others. For some reason,’ he added over his shoulder as they climbed, ‘your mistress has got the Pink Suite. Very nice too. Seems a bit odd though, one of the best suites in the place, and she’s no-one much is she? Still I expect they’ve got their reasons.’
Yes they have indeed, Daisy thought grimly as she followed. And it will take more than some Pink Suite to ensnare poor Penny in their plans if I’ve got anything to do with it. Impertinent upper servants and chilblains must be endured. This was all her own idea, but she knew who to blame for it. Oh yes indeed. The Earl of Danescroft was going to regret the day he decided that Miss Maylin would make a conformable and grateful wife.
Louise Allen
Posted by Historical Romance Author at 5:00 AM

Ooh, delicious, Louise. And just when I was wondering what to put in my own Christmas stocking too.

Oh, I have to have this book. But where is it? I can't find it anywhere.

Linda - it is one of three novellas in M&B's "Married by Christmas" special, out this month. Hope you can find it!