The Futility of War 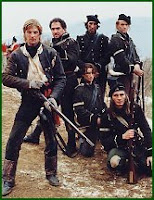 On this the ninetieth anniversary of the end of the Great War it's impossible not to reflect upon the human cost of war and to remember those young men who made the ultimate sacrifice for their country.

It got me thinking about the casualties in the Napoleonic Wars and so I did a little research. Did you know that one in twenty of the men in active service were either killed or injured in the conflict? One in twenty!

Those that survived the battlefield were more likely to perish in what passed for hospitals. Conditions were grim, hygiene non-existent and unsurprisingly disease was rife. Five and a half thousand officers lost their lives in the wars. A huge number until you compare it to the 84,000 other ranks who also perished. OF those in the army 25,500 died in conflict but a massive 200,000 who survived the battlefield subsequently lost their lives as a result of their injuries. Amputations without anesthetic were commonplace and one surgeon boasted that he could cut off a man's leg in little more than a minute!

It ought to have been enough to put an end to war forever but we don't seem to learn from our mistakes.

On a brighter note, we still have Sean Bean and his fellow actors to bring to period alive for us and, thankfully, Sean didn't meet a nasty end - well, not in any of the episodes I watched, anyway.

One in twenty, Wendy. What a dreadful statistic.

Very interesting post Wend and poignant too. Terrible when you think about how many died from their injuries.

Re: Sean Bean...hmmm well Paul McGann was the original Sharpe but broke his leg early on filming the first series and Sean replaced him. I can't help but think Paul would have been a better Sharpe, but hey-ho!

Paul McGann? Better than Sean Bean?
Never!!! Okay he's got dark hair and a more atttractive name - but even Bernard Cornwall says that he sees Sean when he writes the Sharpe books now.
Fenella - who just likes Sean Bean a little-:)

LOL Fenella, but I must say I find Sean greasy looking. (Esp his hair). Very off-putting!

There are some pics of Paul as Sharpe if you go to google, click on "images" then search on "Paul McGann Sharpe". (I'd put the link in but it doesn't normally allow them in blog comments to stop spams)

I have to say though, that had he been Sharpe, he'd never have been William Bush in Hornblower and he does look v good in a Navy uniform!

Interesting post, Wendy. my current wip covers the time of the Peninsular War so perhaps that's why I found the services of remembrance this year even more moving.

On a more cheerful note - I have enjoyed SB's portrayal of Sharpe until the past two programmes but think it may have more to do with direction than SB himself (And I like Paul McGann too).
Melinda

I only read Rifleman Harris this summer, which was SUCH an eyeopener. I mean, I knew the Peninsular War was not exactly a picnic, but it wasn't until I read Harris that I really found out what it must have been like.

No, we don't seem to learn much from history.:(