A Walk in the Past 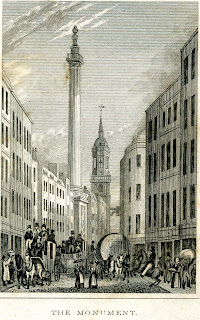 A few weeks ago we went for a walk in London. Nothing too surprising there - except that we did it with Horwood’s Map of London (1799/1819) in hand as well as the modern A-Z. It was a fascinating experience and one we’ll be repeating once I’ve done the homework for a new route.
My original aim was to look at the area in the Spitalfields area where the heroine of my current work in progress is living, but to make a day of it I found a walk from the free site www.london-footprints.co.uk. For anyone wanting to repeat the route, we used the “Spitalfields” walk, with variations.
To prepare I copied the area on a large scale modern A-Z and highlighted the route, then did the same from the wonderful A-Z of Regency London ( The Topographical Society’s indexed book of the Horwood maps). I wish now I’d also done it from the Roque map which makes up the A-Z of Georgian London. You’ll need scissors and sticky tape: it is a bit of a Blue Peter enterprise.
We started off with breakfast in Borough Market, just south of Southwark Cathedral - foodie paradise - then walked across London Bridge to pick up the walk. The street pattern is virtually intact and using the two maps together you can see how, despite the Blitz, the old shape of the City remains, right down to the angle of individual houses, long gone now but fossilised in their modern replacements. 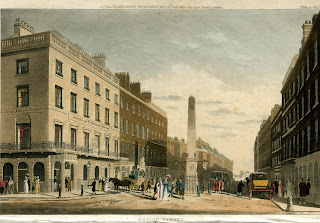 We spent so long on odd corners with our maps that helpful passers-by kept stopping to see if they could direct us - and were more than slightly surprised to find what we were navigating by.
I was disappointed to find that my first ‘fictional’ landmark - Widegate Street, an oddly named, very narrow street off Bishopsgate - seemed to have been swallowed up by Middlesex Street. But I walked along the newer road a few yards and there it was, just as I had imagined it, leading into a narrow alley where my hero, in pursuit of the heroine, gets his coach stuck. And Georgian shops and houses survived all along.
The street I placed my heroine’s home in has vanished under a car park, and the tenterfeld where cloth was stretched out to dry had long since been built over, but the lay-out of streets are just the same.
We walked on, through Spitalfield’s market, past Hawksmoor’s brooding church and into the wonderful Georgian streets between Brick Lane and Liverpool Street station. For anyone trying this walk who hasn’t visited the magical and disturbing Dennis Sever house at 18, Folgate Street it is worth timing your walk to take that in too.
Louise Allen
Posted by Historical Romance Author at 5:00 AM

Hmm. I'm in London again in a couple of weeks. I might just have a saunter around Spitalfields.

Shall dig out maps.

You work very hard for your art, Louise, but it pays off! I'm sure the research and preparation you did for the walk gave you so much more insight.