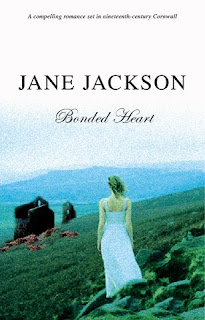 In my last post I promised to tell you how the story of Roz Trevaskis and Branoc Casvellan came about. In Devil's Prize Roz was a friend of Tamara Gillis, that book's central character. During the great storm that led to the book's climax, most of the villagers took refuge in the chapel where Roz was helping look after the injured when Branoc Casvellan arrived bringing food and blankets. Their eyes met and in that instant I knew Roz nursed a secret admiration for him she had never confided even to Tamara. I knew Branoc was attracted to Roz but refused to acknowledge it even to himself. Discovering what had happened in their lives to make these two the people they are, and the struggle each of them faces during the story, totally absorbed me.

Roz was born into a respectable family, the granddaughter of a clergyman who is also a justice. But a combination of desperate circumstances has reduced Roz to working at the Three Mackeral Inn in Porthinnis. In order to pay the fines incurred by her alcoholic mother for 'drunken and disorderly behaviour', Roz has put herself in debt to free-trader, Will Prowse, who has forced her into smuggling.

When her half-brother, Tom, is offered a job as apprentice groom on the estate of local Justice Branoc Casvellan, Roz realizes this is an opportunity to dig her family out of trouble. Then Casvellan's brother catches smallpox, and it falls to Roz to nurse him - bringing her into close contact with her handsome employer. But how will Branoc - and his family - react when the truth of Roz's past, and her involvement with the local smuggling trade, comes out...?

Jane Jackson.
Posted by Historical Romance Author at 8:20 AM

Ooh, don't you just love it when a new story springs up while you're writing the current one?

Great psychological intensity behind this plot that adds to the excitement unfolding in the story. A definite must read.

Thank you all so much for your comments. Bonded Heart was a joy to write. Now I'm getting that lovely buzz all over again as I work on the new one.