We're delighted to welcome Annie Burrows back to the blog with details of her new story, The Rake’s Secret Son, which is out in the “One Candlelit Christmas” anthology. Over to you, Annie!

Thank you!
Christmas is a very special time of year.
Last Christmas, I looked forward with anticipation to the next instalment of the Christmas story published on this blog.
This Christmas I am looking forward to having a story of my own published in the States for the first time! 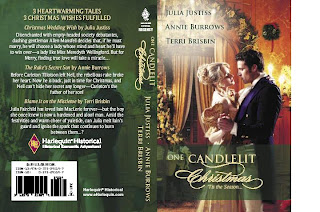 I am thrilled to have a novella, called “The Rake’s Secret Son” appearing in an anthology alongside stories by Julia Justiss and Terri Brisbin. The anthology is called “One Candlelit Christmas” and is published by Mills & Boon.

When I was thinking about writing a story with a Christmas theme, I realized I wanted to focus on what is really important about the season. Not the customs, which change from one era to the next, but what started it all off – God reaching down to mankind by sending a child to be born in humble surroundings. With the line from the Wesley hymn, “God and sinners reconciled,” I set my story in a tiny cottage, and made my heroine an unmarried mother.

Here is an extract from “The Rake’s Secret Son”


Harry Tillotson barrelled through the church door and up the aisle, wiping his runny nose on the back of his torn jacket sleeve.
It was just three weeks to Christmas, and they had been learning all about the coming of the Christ child in Sunday school. Mary was going to have a baby, but it was not her husband’s, Reverend Byatt had said.
And some of the older boys had sniggered, and looked at him, and on the way home, they had begun to make nasty remarks about his mother. He had tried to make them stop. But there were too many of them. All of them thinking they were better than him, because they had a proper ma and pa, most of them married in this very church.

Harry glared up at the stained glass window where a glowing Madonna smiled serenely at the baby on her lap. Reverend Byatt had said God sent a baby at Christmas time to show He wanted to forgive sinners.
So why wouldn’t anyone forgive his ma for having a baby? For having him? When she was the kindest, and cleverest, and hardest working of all the mothers in Barstow?

People in the bible, he sniffed, angrily dashing a tear from his mud and blood caked face, just weren’t like real people at all. Take that Joseph the carpenter, Mary’s husband. He had somehow known he wasn’t the baby’s real father, but he hadn’t gone round telling everyone Mary was wicked, then gone off to war and got killed! No, he had stayed and looked after her.
“Why couldn’t ma have married someone like Joseph?” His words burst from the misery deep inside, startling him as they rang out through the empty church.
You weren’t supposed to talk in church. Only to say your prayers.
He whipped off his cap, clasped it between his hands, and bowed his head in a penitent attitude.

But his voice was still throbbing with resentment as he muttered, “She should’ve had a husband who would stick by her no matter what. Then nobody would ever have known she had done anything wrong. And the other boys wouldn’t think they have the right to make my life as horrid as they can, just because I’ve never had a proper father! Nor they wouldn’t call my ma those names either. I do try to stick up for her, but,” he hiccupped, remembering the crowd who had circled him, taunting and jeering not five minutes earlier, “I’m too small!” Another tear ran hotly down his face to soak into his collar.
“The Reverend said you sent Jesus to get born in a stable, to prove you wanted to reach the poorest and lowliest and forgive their sins. Well,” he complained, “everyone looks down on us. So that makes us the lowliest. And Squire Jeffers says my ma’s the greatest sinner in these parts. So I should think you’d jolly well want to send us a man like Joseph to make things right for us, and then,” he lifted his face defiantly towards the high altar, “I might believe there’s some point in having Christmas!”

A sudden shaft of sunlight pierced the Mary window and lanced down to strike the floor right in front of his scuffed boots.
He flinched, guiltily acknowledging he shouldn’t have shouted at God.
A hell-born brat, that’s what Squire Jeffers said he was. Even though Reverend Byatt argued that nobody was beyond God’s forgiveness.
Harry turned on his heel and pelted back down the aisle. He wasn’t sure which of them had it right about him, but one thing he did know. He had to make it back to the one place he knew he would always be welcome, even though he was a bastard.


To celebrate the launch of this anthology, Julia, Terri and I are organizing a competition to win a special prize basket filled with holiday scented candles (well, with the anthology called “One Candlelit Christmas” what else could we have offered as a prize?) To enter, please visit the website of any of the authors for further details.
(www.juliajustiss.com or
www.annie-burrows.co.uk or
www.terribrisbin.com )

Oh Annie, that's a wonderful excerpt, I really can't wait to get hold of the whole story and read it. Well done you - to me, it sums up Christmas perfectly.

Sounds good to me too, Annie!

I loved this extract. It really pitched me into the drama of the period and gave immediate empathy with the character. It's a definite must read as I can't wait to find out what happens next.

Thanks for your lovely comments Melinda, Jan and Kate.
I will let you know when/if this anthology comes out in the UK. At the moment it is only on sale in the States.
(though it's still not too late to have a go at entering the competition to win a free copy!)
luv
Annie

What a gorgeous small boy!