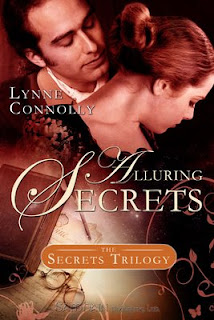 A short story for you, set in the future for Penelope and Severus, from "Alluring Secrets." It answers a question left unanswered in the book, but apart from revealing that the hero and heroine of the book eventually get together, I don't think it contains any spoilers!

Severus took another turn around the salon and heard a moan from upstairs. At least she was still alive then. His friend Peter clapped him on the shoulder. “You’ll wear a groove in that carpet.”

Severus groaned and dropped his head. “We shouldn’t have tried for a baby, not right away. But she wanted it, she said I was to forget her background.” Peter didn’t say anything, but stared at him, one eyebrow quirked. “Her mother…she had Penelope, then constant miscarriages. The last one killed her.”

Peter’s smile of reassurance turned grim. “Her family didn’t have much to do with mine, so I never knew that. I’m sorry. I know it’s hard, but try not to think about it.”

“She won’t. Don’t even think it. She’s carried to term—“ He broke off at an expression on his friend’s face. “She didn’t?”

Severus met his gaze and then looked away. “A little over term, actually.”

“You mean…?” Peter crossed the room and gazed up at the portrait of Penelope. “You sly dog!”

They both looked up when they heard a cry.

Upstairs, Penelope felt supremely smug. They’d cleaned her, cleaned the baby, and now her moment of triumph had arrived. The nurse had even found her spectacles, so she could see her husband’s face the moment he entered the room. She held her child, a snoozing bundle in her arms. How such a beautiful creature should have come out of her still amazed her.

The door opened and he came in. She didn’t look up immediately, but she knew it was him. Something in the air, a tingling, sharpening feeling, or maybe they were so attuned now that they both felt it.

At last, Penelope raised her eyes and met his dark ones. She’d seen them sparking with fury, velvety with passion and alight with laughter but she’d never seen him weeping before. One tear tracked down his face from the outer corner of his right eye. She watched it, as fascinated with this tribute as she was by her baby. And it was a tribute. A token of the way Severus loved her, and she loved him.

He sat down on the bed, something that might give the nurse an apoplexy, but she wasn’t here now. She’d left them alone to welcome their child into the world.

Penelope drew aside a corner of the blanket so Severus could see his child better.

“Your heir, my lord, the young Lord Layton.”

Severus swallowed and reached out a tentative finger to touch his son’s cheek. The baby turned, alerted by the touch and Severus drew back. Penelope laughed. “He won’t break.” When Severus lifted his gaze to hers she smiled. She could afford to smile now. She’d pushed her fears aside and did as the midwife told her. Severus had insisted a physician and a nurse should also be present, but as matters turned out, they didn’t have much to do. “Here, take him.”

She lifted the babe and pushed him into Severus’s arms. “Support his head.”

After a minute or two, Severus’s arms tightened and he brought the child up to his mouth, kissing his forehead. “Thank you,” he said. “Thank you both.”

His eyes were still moist when he looked at his wife again and it was a measure of his strength and confidence that he let her see how moved this moment made him. He leaned forward and pressed a gentle kiss to her lips, the sweetest she could ever remember. The baby grunted and he drew back, holding him like porcelain once more.

Penelope laughed again. “The midwife said we should have a parcel of babies. I’m made for bearing them, she says.”

Severus huffed. “I don’t want you ever to go through that again.”

They both knew he would change his mind.

Posted by lynneconnolly at 1:22 PM