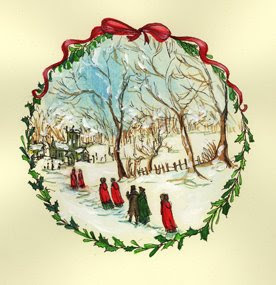 Christmas at Pemberley - how would Elizabeth Darcy have coped if all her family descended upon her?
Mr and Mrs Bennet have been behaving uncharacteristically well - Lizzy is completely bemused by her mother who as mother-in-law to the 'great Mr Darcy' as she calls him has become as regal as a queen and determined on liking everyone and everything, even Miss Bingley. This extract is taken from the book I am currently writing - I hope you enjoy it!


To say that Elizabeth was relieved when Christmas dinner was over is something of an understatement. But she was satisfied that the meal had been an excellent one and when washed down by the majority with several glasses of wine, found everyone in congenial spirits for the game of Charades. Mr and Mrs Darcy started, followed by other willing volunteers and soon the assembled guests relaxed and started to have fun. There were some excellent puzzles and even Mrs Bennet began to enjoy herself when it came to her time, delivering hers with what she imagined was an erudite air.
Miss Bingley’s turn came next. She waited until everyone was silent for the greatest, dramatic effect, before she recited her charade by heart.

“My first has the making of honey to charm,
My second brings breakfast to bed on your arm,
My third bores a hole in leather so fine,
While united the whole breaks the heart most kind.”

She looked around the table with a smirk upon her face and played with her bracelets as if she must find another amusement to keep her occupied from waiting for answers, which surely would never come. Charades were her speciality, she knew, and surely this dull company did not have a clue.

Mrs Bennet piped up immediately speaking in the revered tones she had adopted since stepping over the Pemberley threshold. “Bees and honey go together rather well to my mind, Miss Bingley. I think ‘my first’ is a bee.”

“Well done, Mrs Bennet,” cried Mr Darcy, hardly able to keep the astonishment from his voice, “I am sure you are right, an excellent thought.” 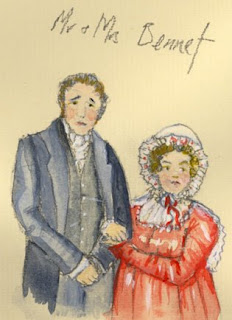 Mrs Bennet instantly flushed as scarlet as the berries on the holly leaves adorning the portraits. She directed her best smile at her son-in-law patting her curls in a girlish manner when she thought he looked at her.

Kitty was next to surprise everyone as she proclaimed that ‘the second’ was a tray, and before they could even worry over ‘the third’, Mr Bennet declared he knew the complete answer to the riddle.

“Miss Bingley, I have found you out,” he said, raising his glass to her across the table. “Duplicity, falseness and treachery are your game, are they not?”

Miss Bingley held his studied gaze over the table and did not flinch. Elizabeth held her breath. What on earth was her father saying?

Mr Bennet smiled reassuringly at his daughter before delivering the solution with triumph. “The word ‘Betrayal’ is the answer to your charade, I think.”

For the first time Elizabeth felt some discomfort. She knew her father too well to imagine that his remarks were not given without his intentions being satirical. She knew exactly what he thought of Miss Bingley and of her mistreatment of Jane. But she need not have worried, Miss Bingley seemed not to notice, graciously accepting her defeat and when Mrs Bennet declared how clever Miss Bingley was to devise such a riddle, the latter fairly glowed with pride, and almost, but not quite, returned the compliment.

“I am so pleased you enjoy charades as well as we do here at Pemberley, Mrs Bennet,” she said. “It is an old tradition that I believe our host started in his youth. But, as long as I have been coming here I do not think I ever heard of a charade based on betrayal, although the very word has such connotations that I will forever associate with Pemberley. Mr Darcy, what do you think?”

Mr Darcy looked rather discomposed for a moment. “I cannot think to what you refer, madam,” came his answer and his expression, which formerly had been congenial immediately altered to one of haughty disdain.

“You remember, Mr Darcy, I am sure, though it is a long time since,” said Miss Bingley, who to all intents and purposes was smiling at him. “I can never think of that word without summoning up a picture in my mind of the theatricals we used to put on at Christmas. Shakespeare: love and betrayal, his universal themes. You must remember when we did Twelfth Night. You were Duke Orsini and I was Olivia. How you pined for me!”

Elizabeth was all attention. Her heart began hammering as she recollected the letter she had found in the library. So, Fitzwilliam had played Orsini, but it did not follow, she reasoned, that the Orsini implicated in the letter was her husband. There had probably been hundreds of theatricals over the years, and in any case, the letter’s recipient might have nothing to do with any of it. She waited to see his response.

“My dear Caroline, I can barely recall such an event, and I must admit, although I can remember being dressed up for many a part in my youth, the particulars escape me. Tell me, was I any good?”

This brought a laugh to echo round the room. Mr Darcy stood up and with a mock bow announced that as there were scarcely two hours left before the dancing was due to begin, that they might all wish to repair to their rooms for restoration and preparation.

In her dressing room Elizabeth prepared for the ball and though the looking glass told her that she had never felt more pleased by her appearance, her feelings were in turmoil. Caroline Bingley, it had to be said, always had the power to make her think irrationally and tonight was no exception. That lady’s allusions to the past, to a time before Elizabeth had known her husband, made her feel not only uncomfortable, but also quite envious. It was silly, she knew, but she must admit a certain jealousy when she thought about all the Christmases he must have spent in the company of Caroline Bingley and every other young woman in the vicinity.

“I know very little about my husband,” she thought. “I know he was never in love with Caroline Bingley, but does that mean that he was never in love with anyone before he met me? I have not considered such a thing before today, but I am certain that a man does not reach the age of twenty nine without experiencing an affection or infatuation, or maybe something more.”

Could the letter she found implicate her husband in some way, she considered for the first time? Lizzy did not want to think about it, but she felt sure that her mind would be put at rest with just one more enquiry. For now, she would forget about it and concentrate on the matter in hand. She scrutinised her reflection with a critical eye, but was satisfied enough to smile at the young woman who stared back at her. Elizabeth’s gown of white sarcenet fitted beautifully; accentuating her slight and graceful form, with her headdress of lace and feathers, further emphasising her colouring, her skin and hair dark as a gypsy.
There came a soft knock upon the door and when she called out, expecting to see her maid, she was delighted to find her husband instead. He carried her jewel boxes and before long he had assisted Elizabeth with their fastenings, performing this simple task in such a way as made her feel that she must be very precious as he lingered over adjusting the diamonds in her ears, placing her necklace just so and holding her hand in the gentlest manner to slide her ring onto her finger. When he had finished he stood back to look at her with such an expression of love in his eyes that Elizabeth could hardly meet them with her own. 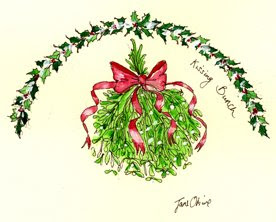 “I love you, Mrs Darcy,” he said, leaning forward to kiss her lips. “Come, let us go, it is time to open the best Christmas ball Pemberley has ever seen.”

Happy Christmas Everyone
Jane Odiwe
Posted by Historical Romance Author at 7:57 AM

Email ThisBlogThis!Share to TwitterShare to FacebookShare to Pinterest
Labels: Christmas at Pemberley, Pride and Prejudice

This sounds interesting- Could Lizzy have a secret rival, I wonder?
When do you expect to finish this?
I expect it will be 2010 before it's on the shelves.
Fenella

I've got about another three months work on it I think- and yes, if I'm lucky it will be 2010 before it's on the bookshelves!