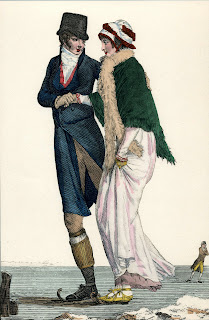 I love mistletoe with its ancient associations and its weird shape. I keep trying to get it to grow in one of our old apple trees, but without any luck yet.

Here is the moment when the hero and heroine of Mistletoe Masquerade, out in November in Mills & Boon’s Married by Christmas anthology, experience their first kiss - under the mistletoe, naturally.

‘Look up Daisy.’
‘Hmm?’ She tipped back her head and stared up through the bare branches. ‘Oh, a robin, how lovely. Look at the way his throat is working with the force of his singing. You would never believe such a tiny scrap could make so much noise.’
‘Look just above it.’
She refocused and he saw the tiniest twitch at the corner of her mouth when she saw what he was referring to. Then it was gone and she was saying repressively, ‘Mistletoe?’
But it had been there, that spark of mischief. He moved in front of her, put both gloved hands on the tree trunk either side of her head and leaned in. ‘Mistletoe. And we will bring down the wrath of Druids everywhere if we do not do the proper thing when beneath it, especially at this time of year.’
‘Wrathful Druids will be the very least of your problems if you try and ki…’
It was everything he had guessed it would be, kissing Daisy Lawrence. Softness, the fragrance of warm femininity and the dangerous spark of her temper as she decided whether to kiss him back or box his ears.
She tasted very faintly of peppermint. He slipped his tongue between her lips, urging them to part for him, wary that he would find her teeth, not the sweet heat inside. She was still braced against the tree, her hands by her side. She lifted them, suddenly, and as suddenly moved away, just enough to gasp, ‘Oh you wretch,’ before clasping her hands in his hair and pulling his head down to hers again.

A Merry Christmas to everyone and I hope you enjoy this charming couple from the French Modes et Manières series of early 19thc prints.
Posted by Historical Romance Author at 5:00 AM

And I like the print too. Although the ice seems to have set in ripples...