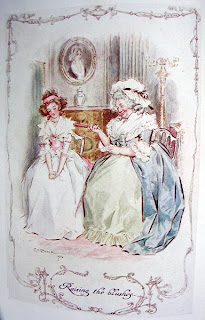 Willoughby's Return is the title of my next book, a sequel to Sense and Sensibility to be published by Sourcebooks in the autumn 2009. In this extract Marianne Brandon is visiting her mother at Barton Cottage and is obliged to spend the evening at Barton Park with the Middletons, the family who helped them out of financial straits. Marianne's past has already caught up with her on a visit to Exeter with her sister Margaret and this evening promises more of the same to our heroine's great discomfort.

With a heavy heart did Marianne dress for the evening’s entertainment. She did not wish to admit to herself that she was quite shaken by the episode of the afternoon but she did acknowledge that the last occupation she needed was to spend any length of time with Lady Middleton’s inquisitive mother, Mrs Jennings. She heard Sir John’s carriage draw to a standstill outside in the lane, the horses whinnying with impatience to be off again. Marianne adjusted the pearls at her throat and stroked the diamond on her finger as though touching it would bring William nearer to her. If only he were to accompany her to the Park. She knew he would have steered the conversation away from any subject that Marianne did not care to discuss. One look from her was usually enough and he would come to her rescue, but he was not here and she would have to make the best of it. Mrs Dashwood’s voice calling her to come down broke her reverie; she picked up her gloves and slowly descended the staircase.

The reception that greeted them all was as welcoming as it could be. Sir John Middleton, a gentleman in his mid forties, was as good looking and as congenial as ever, apologising for the lack of bodies to divert them, saying that had there been more notice of Mrs Brandon’s visit he would have secured a much larger party to dine with them. Lady Middleton, an elegant woman of two and thirty, was as reserved as her husband was frank and as cold in her manner as she had ever been on former visits. If she spoke more than a dozen words together for the entire evening, Marianne decided she would have been surprised. In complete contrast to this lady, her elderly mother was affable and merry, talking non-stop, never pausing to take a breath before she ran on to some other subject. She was a tease, full of jokes and to Marianne’s mind, was still rather vulgar. However, this aspect of Mrs Jennings’s character, Marianne was prepared to forgive for the most part for she had never forgotten the old lady’s kindness. Mrs Jennings dominated the conversation from the start and was convinced that Margaret must have a secret beau because of the way she had dressed her hair. She pretended that she had prior knowledge of his name, even when it was quite apparent to everyone else that this could not possibly be the case.

Mrs Jennings’s conversation took a turn for the worse, being made up of impertinent questions that more than hinted at her idea of Marianne being in a particular situation on account of the fact that she had detected a want of appetite at dinner. “I daresay I am correct, Mrs Brandon, am I not? I see you blush. Tell me, James is over two years old now, that’s right isn’t it? And I am sure it is about time for him to look forward to having another baby to play with.”

Marianne was as cross as she could be and could not think how to divert the course of the old lady’s banter. She soon formed a plan to amuse the whole company and give her an excuse to leave Mrs Jennings’s side. She would offer to play the pianoforte. But before she had the chance to speak or remove herself, she heard Lady Middleton suggest that her mother relate the news that she had heard in Barton village that very afternoon.

“Why, yes, I was coming to that, only I have not seen Mrs Brandon for a twelve month and we had important intelligence to divulge to one another first. Now, having got that out of the way, I must tell you I happened to see Mrs Whitaker this afternoon in the village. Poor soul, she is plagued with such ailments, it is a wonder she can walk at all. Her eldest daughter, Elizabeth, who by the bye was at school with my daughter Charlotte, was never expected to marry, what with her being such a plain sort of girl and always so very shy, but is confined and expecting her ninth child as I speak. By all accounts she is not so very timid now...” Mrs Jennings paused to laugh out loud, nudging Marianne with her elbow followed by a theatrical wink. “Do not mind me, Miss Margaret,” she added with a nod towards her direction, “but I daresay we married ladies know to what I surmise...”

Marianne winced with embarrassment and glowered at her mother. She desperately wanted to go back to the cottage and retire to bed. Mrs Dashwood averted her eyes. Mrs Jennings’s voice droned on in the background and Marianne hardly attended to a word she said. Her thoughts turned to Delaford. She wondered what William was doing. James would, no doubt, be tucked up in bed now; his dark curls tumbling over the pillow, his cherubic face flushed with sleep. It was hateful not to have said goodnight to him and she was missing him terribly. William would be in his study, reading his favourite poems, perhaps. She was quite lost in thought.

“...And Mrs Whitaker said that she is very dangerously ill, with only her faithful servants to nurse her,” Mrs Jennings continued. “Poor lady, no children of her own and no sign of the one who is to inherit. He who shall be nameless! You know to whom I refer, Mrs Dashwood.”

Marianne’s ears pricked up at the last declaration and guessed that the lady she spoke of was none other than Mrs Smith of Allenham Court, Mr Willoughby’s benefactor. Now Mrs Jennings was running through the list of Mrs Smith’s ailments and announcing as if she were the apothecary herself, that it was certain she would be dead before the week was out. Allenham would be empty, a very sad business, or so she had thought at first. “Then I bumped into Mrs Carey, whose cousin had been shopping in Exeter this afternoon. Mary Carey had seen them with her own eyes!”

“I wish you would explain with a little more comprehension, mother. Whom did Mary Carey see in Exeter this afternoon?” begged Lady Middleton, who despite affecting disinterest was clearly anxious to hear a full report.

Mrs Dashwood coloured on hearing this information and cast a glance at her daughter. Marianne was clearly mortified and her mother grieved for her. How could Mrs Jennings be so insensitive?

“Did you not happen to see them yourselves?” the old lady enquired, directing her attention at Marianne, whose blushes were now visible to even the most unobservant of the party. Mrs Jennings looked searchingly into Marianne’s countenance, which betrayed every emotion she was feeling, though her voice spoke her hot denial. Margaret was scrutinised next but the latter was unable to speak at all, so afraid was she of betraying the truth of the matter and upsetting her sister further.

“Well, what I want to know is why they are not up at the Court attending their cousin, said I, to Mrs Carey,” Mrs Jennings blundered on, “though I intimated that he had always been somewhat of a character not to be trusted and a very cold fish to boot. And this is not all, Lord bless me. Mrs Carey said that her cousin had been in the linendraper’s just half an hour later when she not only heard the reason why the Willoughbys are refusing to be put up at Allenham, but also received the most shocking news of all!”

Marianne faltered. She felt faint and thought she might pass out at any moment.

“Apparently, Sophia Willoughby was talking to an acquaintance as she was going out of the shop, someone whom it appeared must be a near relation. She heard Mrs Willoughby saying that it was insupportable that they should stay at the Court, that the place needed completely fitting up from top to bottom and that she would not step inside it, let alone stay in the place until all was done to her satisfaction. She finished by saying that with luck, they would be able to start work within a fortnight. Now, what do you think to that? The house is to be occupied by the Willoughbys who will no doubt make it their family home. Not that there is yet any issue from that marriage to date!”

Marianne knew this to be true. The Willoughbys had not been blessed with any children in the four years they had been married. She wondered what John felt about it all, if he ever thought about the daughter he had never seen. She knew she would never have been able to bear the idea of a child of hers being brought up in the world without any acknowledgement of her existence. Perhaps John Willoughby was the cold fish Mrs Jennings described, though in her heart she protested at such an idea. She did not think him completely reprehensible. After all, he had once tried to explain his past actions to Elinor, for which he had seemed truly sorry.

Illustration from Sense and Sensibility by Brock
Posted by Historical Romance Author at 9:46 AM

An intriguing extract Jane. I look forward to reading more when it is published.

Thank you Kate - it seems such a long time to wait to see my book in print, but I expect it'll be here before I know it. I can't believe we're at the turn of a new year already.