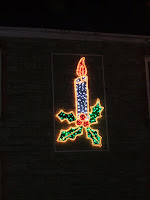 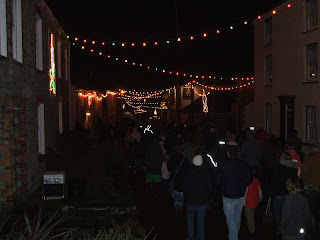 This was the night of the great "Switch On" in Mylor, the village where I live. All through the year various craft-work and jumble sales are held to raise money for the lights. Ours are now officially recognised as comparable to those at Newlyn and Mousehole - which means people actually drive from all over Cornwall to see them! The children are all given a coloured torch and they follow Santa whose open-topped sleight is driven (we're modern in Mylor!) down through the main street. As he passes, each section of lights is switched on. Everyone congregates in and around the pub car park where the official "Lighting Up" ceremony takes place. Then the local male voice choir leads the entire village singing carols. After that there's a general surge towards the village hall for cups of tea and mince pies. 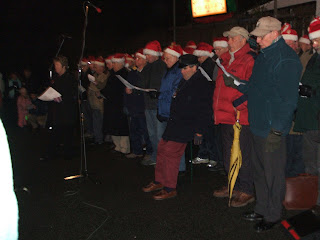 Another traditional ceremony taking place in almost every school in the county is the Christingle service of light and carols. Every child is given an orange that has a candle in it to symbolise Jesus, Light of the World. Each orange is pierced by four cocktail sticks with sweets stuck on them to represent the four seasons and the fruits of the earth. A red ribbon around the middle of the orange signifies the blood shed by Jesus when he died on the cross.


Jane Jackson.
Posted by Historical Romance Author at 8:30 AM

I love Christmas lights. There can never be too many, as far as I'm concerned.