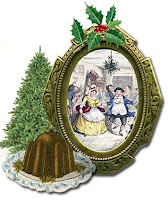 Christmas didn't become a national holiday in England until 1834.  That isn't to say it wasn't observed long before that but was far less commercialised than it became when the Victorians popularised the event.  But many of the old traditions such as Yule logs, roast goose and Christmas pudding were already well established. So was caroling - or wassailing, feasting, decorating indoors with greenery and the exchange of modest gifts. Mistletoe was also in vogue during the Regency period. I suppose I ought to know whether it held the same significance then as it does now. Hopefully someone will be able to enlighten me!

The Christmas period started on the 21st December - the winter solstice - when the yule log would be brought in and the fire kept roaring throughout the festive season. Christmas trees didn't feature at the time but the halls were literally decked with holly. Not until the 24th though: it was considered unlucky to do so before then.

Church formed an important part of the Christmas day celebrations, as did parlour games and spending time with one's family - much like today. On Boxing Day boxes of food and clothing were given to the tenants. Is that the origin of the day's name? Oh dear, I'm showing my ignorance again!

It's lovely to think that some traditions have survived over centuries.

A VERY HAPPY CHRISTMAS TO YOU ALL!

Wendy
Posted by Historical Romance Author at 11:00 AM

Wendy, take a look at my blog at www.joannawaugh.blogspot.com I've posted five articles in my ten-part series on Regency Christmas traditions and will do the rest between now and Christmas day. I delve into the origins of most customs, including why mistletoe, holly and ivy are important aspects of the holiday.