Men's costume in Pride and Prejudice

The new film of Pride and Prejudice is controversial in terms of women's dress, but the men fare better. This is perhaps because men's fashions didn't change so much. 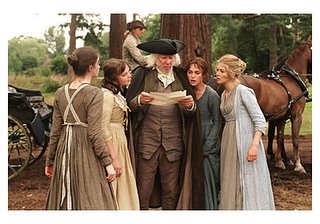 Mr Bennet is wearing an old-fashioned tricorne hat. Like Mrs Bennet, he clings to the styles of his youth. But the rest of his clothes would pass muster in the 1790s or in the first two decades of the nineteenth century. 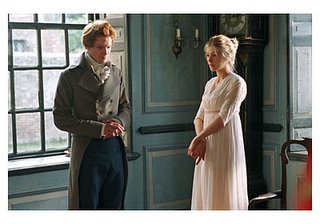 Bingley fares better. As a young man with 5 thousand a year, he is well dressed. 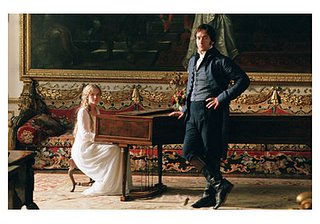 Darcy here is well dressed, as befits a man of his station. 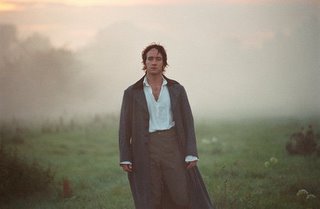 We have no idea what he's wearing here. Is it a coat? Is it his dressing-gown? And where is his cravat? Quite frankly, when he looks like this, who cares?


What do you think?
Is this a wonderfully romantic image, or is it a liberty too far? Do you think he looks so wonderful you don't care about accuracy, or do you think that Darcy would never go out in a state of partial undress? Does this shot make the film for you, or does it ruin it?
Posted by Historical Romance Author at 6:40 PM

What time of year is it? Because if Darcy's wandering around in winter-time without a cravat, he runs the risk of developing a putrid throat.
It seems to me that this film is probably including a cravat-less Darcy to counter the popularity of the TV version's bathing and soaked-shirt Darcy.
Cravat-free wandering does seem to me to be more likely in Heathcliff than in Darcy.

Why does Mr Bennet look crumpled and disreputable, rather than sarcastic and cynical?

I think that it was Byron who brought the open-necked look into the fashion, during the second decade of the 19th Century. Indeed Byron went as far as having early portraits of him altered to show this new style, rather than the Beau Brummell™ look that he had previously adopted.

Putrid sore throats would have been less of a problem in the isles of Greece, where burning Sappho loved and sung (Eternal summer gilds them yet, but all, except their sun, is set.)

Whilst I loved the film, which I have now seen twice, and thought Matthew McFadyan absolutely dishy, I felt that this scene was a little too Wuthering Heights-ish, and was too consciously seeking the effect engendered by Colin Firth in a wet shirt.

Darcy and Lizzie getting together is romantic enough in itself without having to be put in an overtly 'romantic' situation.

At least Colin Firth's Darcy was expecting to be home alone... I don't remember the circumstances of that shot, but if he /is/ wandering around half dressed like that, he's severly gone down in my estimation.

Yes, this statement is quite remarkable and appropriate for all those who think that escort is not a good option for them. First of all, you can play advanced sexy games with escorts, and they also do more love and intimate scenes with you and you got this love from our Karol Bagh Escorts very well.
Karol Bagh Escorts