Pride and Prejudice costumes - what do you think?

Director Joe Wright broke with tradition when he dressed the Pride and Prejudice characters in a mixture of styles by setting the film in 1798.

We have no quibble with setting the book in the late eighteenth century, as our very own Amanda dated Pride and Prejudice at 1799/1800 when she worked out a timeline for Pride and Prejudice whilst writing Darcy's Diary. But what do you think of the mixture of styles? 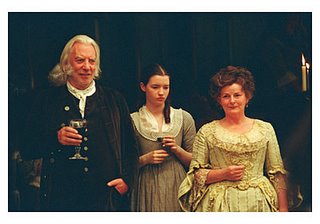 Here, Mrs Bennet is in a dress from the early 1790s, which, if she was wearing an old dress would be accurate. But what about Mary? Is her gown high-waisted or low-waisted? It seems in the middle to us. 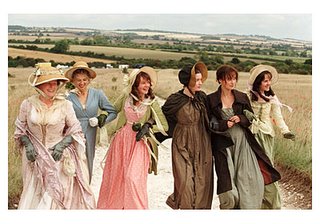 And here we have the same mix of styles, with Mrs Bennet in a low-waisted gown in the style of the 1790s and the girls in a range of dresses with waists between low and high. 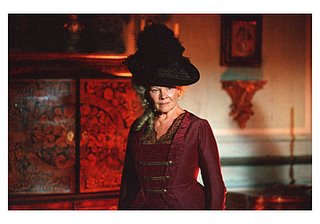 Do you think Lady Catherine looks more intimidating in fashions of the earlier 1790s, or do you think she looked more imposing in the high waisted styles of the early nineteenth century, as in the BBC's adaptation of Pride and Prejudice? 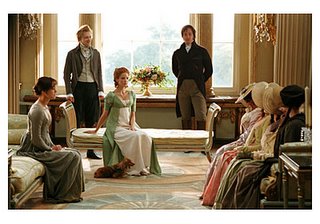 And can anyone, looking at this picture of Caroline Bingley, understand how Joe Wright thinks high waists make women look like marshmallows?!

Is it only men who dislike high-waisted gowns? Thackeray didn't like them either. He drew his own illustrations for Vanity Fair, but although the book is set in 1814, he drew the characters with the fashions of the mid nineteenth century, because he thought Regency fashions were ugly.

What do you think? Is it a man/woman thing? Do you like high-waisted gowns?

Do you like the mixture of fashion styles in the new film, or would you rather they had stuck to Empire line dresses?


Posted by Historical Romance Author at 8:39 AM

I'm no expert on fashions, but it seems to me that high-waisted gowns look best on tall, willowy women with large enough busts for it not to look stupid to be emphasising that part of the anatomy. They look less good on people with wide hips, don't do people with narrow waists any favours, are unfortunate on the flat-chested and don't look good if you run (because they bunch up/cling to the legs in a strange way). When they work, they make the woman look like a classical column. But the earlier fashions shown in the photos here are more flattering to more women, because they have a waist as well as a bust.

I've certainly written older ladies wearing slightly older style gowns than the absolute fashions of the year dictate (in the magazines such as a Beau Monde etc). I remember reading somewhere that powered hair continued long after fashion said it was dead, so the continuation of older styles makes sense to me.

Remember there was no high-speed media in the 1790's to keep everyone up to date with the latest styles. Those living in the country could well be several years behind the current London fashions. Then there is the cost: most of the costumes that exist from that period show signs of having been altered several times as tastes change. Personally, I think the high waisted gowns do not suit everyone, but then, neither do mini-skirts!

Sorry - didn't mean to be anonymous when I posted about the speed at which fashion styles were communicated around the country!

Melinda, in the film it would seem that the new fashions have reached at least one of the Bennet girls, and this being so, it's impossible that they haven't reached the others. Maybe some of them (e.g. Lydia) are less likely to accept old gowns. But is there consistency about which of them wears gowns in the old style and which in the new? If there is, then it could be a way that the director is showing the characterisation. I can imagine, for example, that Mary is probably less interested in fashion than Lydia or Kitty. Given that, as you say, 'most of the costumes that exist from that period show signs of having been altered several times as tastes change', and given that the girls can presumably sew (or take a dress to be altered) it would presumably be a deliberate choice for one of them to wear old-fashioned gowns when she could be having her gowns altered to suit the new fashions.