Why we love the Pimpernel - Part 2 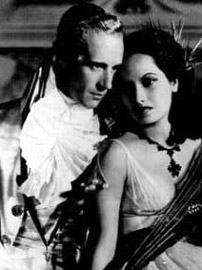 In this extract, Marguerite is in a terrible situation. She is being blackmailed and her brother's life is being threatened. She wants to turn to Percy for help, but he has become cold towards her, because he thinks she is secretly working against him and assisting the Revolution.

And so there is an estrangement between them.

"Can you do aught for Armand?" she said sweetly and simply. "You have so much influence at court. . .so many friends. . ."

"Nay, Madame, should you not seek the influence of your French friend, M. Chauvelin? His extends, if I mistake not, even as far as the Republican Government of France."

She would have given worlds if she had felt the courage then to tell him everything. . .all she had done that night--how she had suffered and how her hand had been forced. But she dared not give way to that impulse. . .not now, when she was just beginning to feel that he still loved her, when she hoped that she could win him back. She dared not make another confession to him. After all, he might not understand; he might not sympathise with her struggles and temptation. His love still dormant might sleep the sleep of death.

Perhaps he divined what was passing in her mind. His whole attitude was one of intense longing--a veritable prayer for that confidence, which her foolish pride withheld from him. When she remained silent he sighed, and said with marked coldness-

"Faith, Madame, since it distresses you, we will not speak of it. . . . As for Armand, I pray you have no fear. I pledge you my word that he shall be safe. Now, have I your permission to go? The hour is getting late, and. . ."

"You will at least accept my gratitude?" she said, as she drew quite close to him, and speaking with real tenderness.

With a quick, almost involuntary effort he would have taken her then in his arms, for her eyes were swimming in tears, which he longed to kiss away; but she had lured him once, just like this, then cast him aside like an ill-fitting glove. He thought this was but a mood, a caprice, and he was too proud to lend himself to it once again.

"It is too soon, Madame!" he said quietly; "I have done nothing as yet. The hour is late, and you must be fatigued. Your women will be waiting for you upstairs."

He stood aside to allow her to pass. She sighed, a quick sigh of disappointment. His pride and her beauty had been in direct conflict, and his pride had remained the conqueror. Perhaps, after all, she had been deceived just now; what she took to be the light of love in his eyes might only have been the passion of pride or, who knows, of hatred instead of love. She stood looking at him for a moment or two longer. He was again as rigid, as impassive, as before. Pride had conquered, and he cared naught for her. The grey light of dawn was gradually yielding to the rosy light of the rising sun. Birds began to twitter; Nature awakened, smiling in happy response to the warmth of this glorious October morning. Only between these two hearts there lay a strong, impassable barrier, built up of pride on both sides, which neither of them cared to be the first to demolish.

He had bent his tall figure in a low ceremonious bow, as she finally, with another bitter little sigh, began to mount the terrace steps.

The long train of her gold-embroidered gown swept the dead leaves off the steps, making a faint harmonious sh--sh--sh as she glided up, with one hand resting on the balustrade, the rosy light of dawn making an aureole of gold round her hair, and causing the rubies on her head and arms to sparkle. She reached the tall glass doors which led into the house. Before entering, she paused once again to look at him, hoping against hope to see his arms stretched out to her, and to hear his voice calling her back. But he had not moved; his massive figure looked the very personification of unbending pride, of fierce obstinacy.

Hot tears again surged to her eyes, as she would not let him see them, she turned quickly within, and ran as fast as she could up to her own rooms.
Had she but turned back then, and looked out once more on to the rose-lit garden, she would have seen that which would have made her own sufferings seem but light and easy to bear--a strong man, overwhelmed with his own passion and his own despair.

Pride had given way at last, obstinacy was gone: the will was powerless. He was but a man madly, blindly, passionately in love, and as soon as her light footsteps had died away within the house, he knelt down upon the terrace steps, and in the very madness of his love he kissed one by one the places where her small foot had trodden, and the stone balustrade there, where her tiny hand had rested last.


With special thanks once again to Sophie Weston, a long-time fan of The Scarlet Pimpernel, who managed to put her hand on this extract straight away.

Posted by Historical Romance Author at 11:30 AM

Oh, that's lovely in an old fashioned way. I'll have to get my hot little hands these books.