Why we love the Pimpernel - Part 1

He's a master of disguise


In the stage play, Fred Terry used to use an uncredited old woman to sit knitting at the foot of the guillotine, so that when, after some shenanigans in the wings, "she" metamorphosed into the dashing Pimpernel, there was a genuine gasp of amazement from the audience. 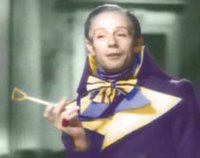 His ultimate disguise was that of a useless dandy, a man who cared for nothing but the style of his cravat. It was so convincing that no one ever guessed who he really was.


Which makes us wonder, was the Pimpernel the first superhero?

Posted by Historical Romance Author at 11:01 AM

Hmm, ya know, could be. Then again, Beowulf did a pretty good job getting rid of Grendel *g*. But Sir Percy isn't too far behind him!

My dh has been known to declare "Sink me!" from time to time *g* I think that's why my fave movie version is the Howard/Oberon one - Leslie Howard played the languid dandy to perfection.