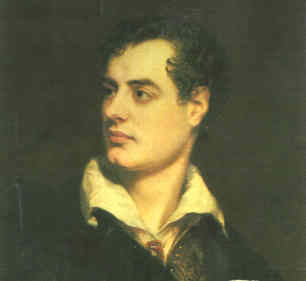 Thanks to Stephen for his comment about Darcy's open-necked look being made popular by Byron, although, as Stephen points out, this was some years after the scene in Pride and Prejudice - and Byron appears to be wearing a little more in the waistcoat department.

We should perhaps think ourselves fortunate that Darcy didn't end up with a turban!

Was he the archetypal romantic hero, or Mad, bad and dangerous to know?


He led a life of dissipation at Cambridge before setting out on the Grand Tour. He left England for good in 1816, driven abroad by scandalous love affairs and financial difficulties. He died helping the Greeks to win their independence.

Byron is probably most famous for Childe Harold's Pilgrimage (1812).
Posted by Historical Romance Author at 9:55 AM

BYRON - mad, bad and dangerous to know?
Yes - an early version of our pop stars with too much adulation and not enough to do. Even at the time many thought that "a good woman" would be able to tame him, but it wasn't so.

By contrast, Darcy has good principals. He doesn't need reforming as such, but Elizabeth teaches him to laugh at himself.

She walks in beauty, like the night
Of cloudless climes and starry skies;
And all that's best of dark and bright
Meet in her aspect and in her eyes:
Thus mellowed to that tender light
Which heaven to gaudy day denies.

One shade the more, one ray the less,
had half impaired the nameless grace
Which waves in every raven tress,
Or softly lightens o'er her face;
Where thoughts serenely sweet express
How pure, how dear their dwelling-place.

And on that cheek, and o'er that brow,
So soft, so calm, yet eloquent,
The smiles that win, the tints that glow,
But tell of days in goodness spent,
A mind at peace with all below,
A heart whose love is innocent.

Anyone who can write like that can be forgiven much.

Take a very passionate, creative individual and give them a physical disability and no love as a child - and then you get the likes of Byron.