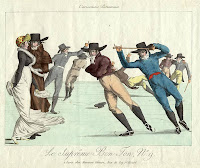 A few years ago I wrote a short story for Christmas called "A Season for Suitors." The hero, Sebastian Fleet has a dark past and a fear of commitment and although he cares for Miss Clara Davencourt he simply cannot bring himself to the point of proposing marriage to her. But then a skating accident intervenes... I have included an extract from the story and hope you enjoy it!

Have a great Christmas and I am looking forward to reading a new Nicola Cornick book next year!

Oh, gosh, I remember that story AND the ice-skating accident. Almost worth falling in for the pleasure of Seb pulling you out again...

LOL Jan, thank you! And thank you to Melinda for the good wishes. I hope everyone has a lovely Christmas!