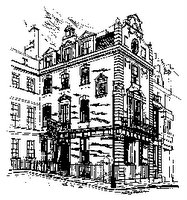 Reading about Fenella's book launch for The Unconventional Miss Walters reminded me of the party I had at the launch of The Lady Soldier earlier this year. Not at home, I hasten to add, but in a club in London - The University Women's Club (see picture left).


The club is based in a house in Mayfair, originally built as a family home in 1876/7 but internally very much decorated in the Georgian style (see photo below). To tie-in with this I had some old-fashioned looking invites printed, which a neo-classical-looking cherub on them. 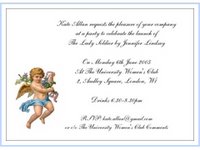 Viviane Morgan was guest of honour and gave a very well informed talk about female cross-dressers through the ages which she had been researching for a book, and for a lecture she had delivered at the National Army Museum.


However, the show was completely stolen by certain guests - namely red-coated Napoleonic reenactors, who had kindly volunteered to come along and support me. Not all red-coated as 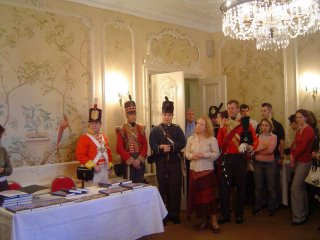 among them was a representative of the 95th Rifles who wore dark bottle-green uniforms. This is the regiment where Jem, heroine of The Lady Soldier, is in at the start of the novel. The redcoats spoke to everyone, sharing their detailed knowledge about Napoleonic military matters and asking the ladies if they wanted to feel their musket balls.


I've written two military heros now - Captain Anthony Dorrell who is a foot soldier (The Lady Soldier), and Captain Robert Monceaux who is in the light cavalry (A Notorious Deception). But what do you think about redcoats? Do you want to see more or less of them in Regency romances?

I'm all for the soldiers, lol.

My first fiction attempt was a War and Peace fanfic back at school - oh, how long ago. ;-) And when I restarted writing in 2001, it was knights and then Roman officers with a few tribal warriors thrown into the mix.

So, go for the redcoats.

I could do with fewer of them (but not if the alternative is to have Dukes and Earls who are members of spy rings. There are enough of them already). I'm a pacifist, so I have to try to blank out the fact that I don't like what the heroes have been doing. A romance featuring 2 Quakers would be nice, or perhaps a vicar like Henry Tilney (he's not at all preachy). It's not that I won't read about soldiers, because I will, but it's not a selling-point for me. Mind you, I'm sure that Quakers and vicars wouldn't sell very well to a market which enjoys rakes and soldier heroes.

I like soldier heroes so more please! Riflemen are my first choice then redcoats.

I hear you, Laura. The hero in Nicola Cornick's book, Wayward Widow, is a terrifically upstanding man - you might like him. I did very much. It's the heroine who plays 'the rake' in this story.

However, I find redcoats quite attractive it has to be said.

Kate, I've read Nicola Cornick's The Wayward Widow, and it's my favourite of hers. I suppose in part it's nice to read something where the gender roles are reversed and the plot of 'the rake redeemed through the love of a virtuous person' is given a very unusual turn. I also really enjoyed the characterisation, which made a 'bad' character understandable and sympathetic, and a 'good' character likeable and not insipid (and he has his prejudices too, so he's not perfect). None of the romance stereotype characters in that book, for sure. And the dramatic scenes towards the end had me on the edge of my seat/almost in tears.