Colonel Brandon's Diary is out in July

I've just learnt that the UK hardack edition of Colonel Brandon's Diary will be out in July. The publishers offer a 30% discount and free UK p&P if you preorder from them, and you can reach them by sending an email here. They will post the book overseas if you live outside the UK. 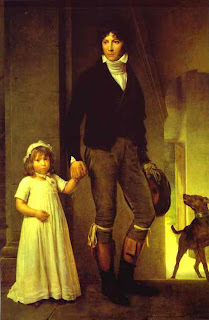 The cover will be a head and shoulders picture, as usual, and it will be taken from this beautiful portrait of Jean-Baptiste Isabey (1767-1855) and his Daughter, Alexandrine (1791-1871), which was painted in 1795 by Francois Gerard.

I wanted to use this portrait in particular because I think it works very well as an image of a young Brandon with his ward, the little Eliza.

When I first read Sense and Sensibility, I thought that Brandon was a dry stick, and I thought it was a travesty that he married Marianne, but on subsequent readings I began to take in more details and I realised that he's exactly the man for her.

He's had a tragic love affair, as she has, and they are both very romantic people. I had a wonderful time fleshing out his back story, including his early unhappy love affair and his duel with Willoughby, before exploring his feelings as he fell in love with Marianne.

This portrait exactly captures him, for me. He's a romantic, and yet he's also able to live and succeed in the real world. He has a strong protective streak, and there's a solidity about him that someone like Willoughby will never match, even if he lives to be 100.

Amanda Grange
Posted by Historical Romance Author at 9:58 AM

Col Brandon always intrigued me, and played by Alan Rickman in Emma Thompson's adaptation he certainly suggested a passionate and powerfully emotional nature, albeit one he suppressed. I hope the book is hugely successful and gains the readership it richly deserves.

Ooooh, I've been wanting to read Col. Brandon's viewpoint for the last few years, since I saw the movie with Emma Thompson. Will this be released in the United States as well?

The hardback won't be released in the US, although the publishers will ship it overseas - for details see the main post - but there will be a paperback release in the US. I don't have a date for it yet, but it will probably be sometime in 2009.

Oh - what wonderful news!! I have so enjoyed the two other JA hero diaries I've read of yours (Knightley and Darcy), and am looking forward to more (waiting too until the Wentworth one is released in paperback). Are you planning to do a Edward Ferrars diary as well?

Yes, I´m planning an Edward Ferrars´s Diary. I´ve become somewhat obsessed with Edward recently, but I think he´s going to have to take his turn behind Henry Tilney!

well, to quote Mags "squeeeee!". That's excellent news Amanda, and I shall look out for both.

Maggie said...
This comment has been removed by the author.
7:25 PM

Maggie said...
This comment has been removed by the author.
7:25 PM

I can hardly wait for this book.

I thoroughly enjoyed Darcy's & Knightley's diaries. I must admit that I was surprised to like her as much as I did, but Amanda Grange is an incredibly gifted writer. The best Jane Austen sequels by far.

I'm buying one for me and one for my friend who LOVES Col Brandon.
I am totally sold out!!!

Thanks, Magdalena, I hope you both love Col Brandon's Diary! If you want to see a cover pic you can find one on my website.

You're doing Henry Tilney's Diary????? Where have I been in the last little while?!?! Mr.TIlney is my favorite Austen man, and let me tell you how much I am excited to have you writing it. I own every single one of your Austen books. Thanks!