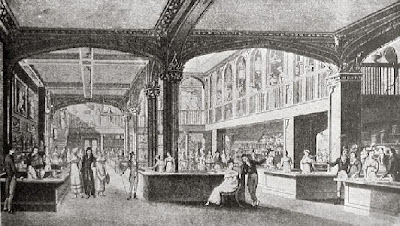 Shopping has always been a favourite activity for women, and the passion for it was well catered for in the Regency period. Shops such as Nicholay and Sneiders the furriers in Oxford Street, the perfumiers Bourgeois Amick and Son in the Haymarket, and B.Harvey & Co. - which is now Harvey Nichols - in Knightsbridge and which opened in 1813, catered for their well-off clientele.

The picture shows the Western Exchange, which was also known as the Bond Street Bazaar and which was often used as a shortcut in rainy weather. It consisted of one large room, fitted out with stalls. In an advertisement from 1832 it is described as 'consisting of a noble, spacious and lofty building, lighted by skylights, arranged on the principal floor, which is 89 feet long, and 57 wide, as a wholesale warehouse, with two handsome staircases leading to galleries, supported by columns, partly ornamented with gilt and Corinthian capitals; conveniently placed counting-houses, recesses with glazed doors, and domestic apartments.'

Sadly, four years later the building was destroyed by fire but the thirst for retail therapy survives to this day. When one considers the modern bustling high street and enormous out-of-town shopping centres it is impossible not to wonder if the ladies of the Regency period knew quite what they had set in motion!

Wendy Soliman
Posted by Historical Romance Author at 8:58 AM

How interesting, Wendy, to think that our current shopping malls spring from the Regency. And today's shopper also has a taste for coffee and hot chocolate - Starbucks being a reinvention of the old coffee houses!

The coffee houses sound like interesting places! Esp as they were "men only" places...

A good book to read about shopping, is "The Ladies Paradise" by Emile Zola. Though it's set late Victorian period in Paris, it gives a great insight into how the smaller shops gave way for the big department stores and the battle between them. There is also a nice love story in it too..

Linda like the smaller shops today and Tesco! (Well apart from the love story!)

Oh I am sure there is room for a love story or two in Tesco....

What a great print, Wendy.

Love the thought of 'domestic apartments' in a mall.