The House Party and Balloons. 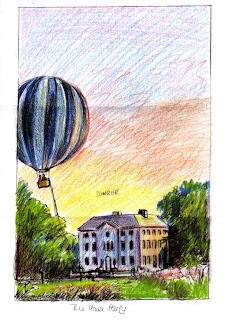 This is the rough for my next book, The House Party, which is released by Robert Hale at the end of July 2008. I'm so pleased that the artist has included an image of a balloon, but can you spot what's wrong?
The balloon should have a tapered end as it contained a hydrogen mixture, not hot air. Also the tether should not be slack, but tight.
The artist is correcting these for me and is using the pictures below to help him. 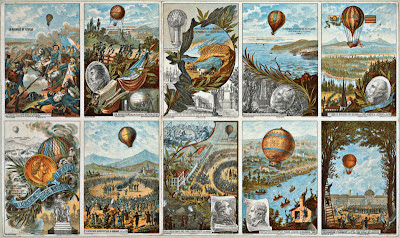 You can see the difference between the early balloons and the ones that were flying during the Regency. Picture five, on the top row, shows the tapered end and picture four, on the bottom row, shows the open end.
Montgolfier invented hot air balloons in the 18th century, but they were so unstable this method of inflating the sphere was soon abandoned and the more sophisticated 'rarefied air' system adopted. There were stories about early balloonists landing in fields and the farmers, thinking they were being invaded by dragons, attacking the pilots. Of course, the aeronauts had no way of knowing when the trays of burning straw, that filled the balloon with hot air, were going to burn out.
There is an account that eight people danced a quadrille in the basket of a hot air balloon over Paris! I expect a great deal of red wine had been consumed before they agreed to ascend for such a daft enterprise.
Don't forget to order my latest book, A Debt of Honour, from www.halebooks.com, Amazon or from your local libary(UK only). This book will be available on www.regencyreads.com at the end of the month as well.
Best wishes
Fenella
www.fenellajanemiller.co.uk
Posted by Historical Romance Author at 8:45 AM

What a wonderful poster, Fenella.

And how fabulous to imagine a time when a dragon landing in your field was thought more likely than an adventurous balloonist!

If it contained a hydrogen mixture, it must have been highly flammable! Glad they eventually discovered helium!

I wouldn't go up in one, hot air, helium, or hydrogen - I am a member of the club that believes that only by gripping tight to the arm rests will a plane take off!!
Fenella