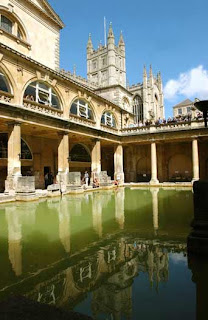 Did anyone see the review of Katherine Ashenburg's book, 'An Unsanitised History of Washing' in the Culture section of this week's Sunday Times? At first glance it might seem a rather strange subject for a book but, in fact, the review was highly enlightening, bringing to light facts that I hadn't been aware of.

The Romans invented the concept of communal bathing - naked communal bathing that it - but, naturally, they did not expect to wash themselves and had servants on hand to perform the task for them. It wasn't the onset of decency that closed the doors to bathhouses but terror. In the mid-14th century bubonic plague, or the Black Death, killed 25 million Europeans, one third of the population. This pandemic was attributed to the Almighty's disapproval of luxury, including bathhouses, and washing fell into disrepute for almost four hundred years.

Fortunately, by Regency times, bathing was once again in vogue and the city of Bath itself was a fashionable destination for those seeking to partake of its restorative natural spring waters. Communal bathing enjoyed a resurgance, but this time modesty was preserved by the wearing of shirts and drawers by the gentlemen and linen shifts by the ladies.

Those seeking cures for a whole raft of ailments - anything from gout to palpitations - might have chosen to swim or simply relax in the Great Bath, pictured here, which would originally have been covered by a pitched timber roof, and into which the water fell directly from the Sacred hot spring.

Posted by Historical Romance Author at 9:19 AM

Fascinating, Wendy. But bathing in Georgian times had little to do with cleanliness: I am not sure I like the idea of sharing the hot bath with a crowd whose ailments might include smallpox, scrofula and even worse things......