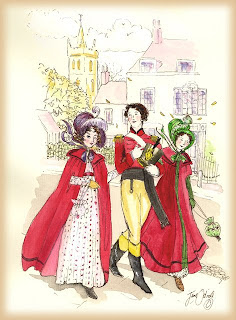 March has been a very exciting month for me. I signed my contract with Sourcebooks for the new publication of Lydia Bennet's Story which will be published in October.


Lydia Bennet's Story begins with some of Lydia's thoughts from her journal - the following short extract precedes Chapter One. Lydia's journal appears at intervals throughout the book; I had a lot of fun getting inside Lydia's head and 'seeing' her version of the events that take place. I hope you enjoy what follows - Jane Odiwe.

I have quite worn out my silk dancing slippers at the Assembly Ball tonight by standing up with several very handsome officers for every country jig and figure. Indeed, on entering the Rooms I had barely cast my eye about before I was applied to by a string of gentlemen, though sadly, they were not all officers. I must say there is something about a soldier, which makes an excellent partner - I am quite giddy in their company!

I wore my tamboured muslin, which becomes me extraordinarily well and received so many compliments I was quite the belle of the ball. So smitten by my saucy looks were the officers of the Derbyshire militia, I swear I sat down not once! I danced the first two with Mr Maybury, then Mr Denny, Mr Wooton, Mr Blount and Mr Wooton again; then a simpering coxcomb, Mr Cavendish, followed by Mr Wickham. That gentleman danced and teased me by turns - he has a way of looking into my eyes, which I find most disconcerting. Mr Wooton begged to dance again but I was heartily sick of him, so as the supper bell rang, I affected a fainting seizure with an attack of the vapours, which had the opposite of the desired outcome, making him attend me all the more. It also meant that I missed dancing the Allemande, which I love - hateful man!!

Mr Blount took me quite unawares at the supper table, by presenting me with a small package. On closer examination, I guessed it had been sent from Mr Howett who was indisposed this evening. Enfolded in a piece of violet scented paper was what I can only imagine to be a lock of his hair, (nasty, wispy, sort of stuff) with a page of sentimental poetry, (clearly not of his own invention). As soon as I had the opportunity, I disposed of this unwanted gift, as I happened to be passing the huge chimneypiece on one side of the room. Unfortunately, I had not taken into consideration the stench a large lock of hair like that can make and the paper would smoulder and only half burnt. It caught the attention of my mother who is generally not so observant but she has a suspicious nature. However, I managed to convince her that it was merely a lock of my own hair that I had cut off because it was being unruly, wrapped in an old laundry bill. Fortunately, I am the apple of her eye and she is easily placated.

Mr Maybury asked me to take a turn with him in the grounds as he suddenly became overheated whilst conversing by the fire. No sooner had we stepped through the french doors than the naughty man was begging to steal a kiss and as I was thus constrained between a jagged wall and a rugged man I was forced to surrender. Note to myself - will hereafter forbear kissing gentlemen with whiskers - they tickle too much!

Mr Wootton is threatening to pay court and at the very least will call tomorrow. His eyes are too close together and he has damp palms, bad teeth and breath reminiscent of a stableyard privy. No doubt he will bring Mr Blount for my poor sister, Kitty. He is equally captivating, being two feet nothing, with more fat than a hind of pork and with eyes that squint out from a florid visage like a slapped behind. Mr Edwards will be dragged along in tow to plead their case - we must visit Aunt Phillips and escape the deputation.

His whiskers might tickle but he is so gallant. I long to see Mr Maybury again! Mrs Lydia Maybury – there, that looks very well! 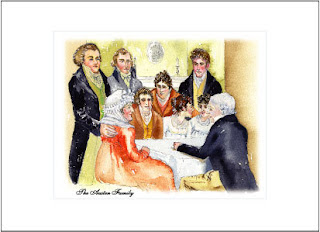 I also have had the excitement of seeing some of my Jane Austen watercolours featured in a short film about her life on the Jane Austen Book Club DVD. Joan Klingel Ray and Claire Bellanti of JASNA along with Robin Swicord, the director of the film, talk about Jane's life and every now and again one of my paintings pops up.
I missed the Jane Austen Book Club film when it was on at the cinema, so I was really pleased to have seen it at last and enjoyed it very much.

Jane Odiwe
Posted by Historical Romance Author at 10:00 AM

Congratulations with the new contract. This novel really brings Lydia's voice to life and should delight all Jane Austen fans.
Kate Tremayne

Congratulations, Jane! I enjoyed the excerpt very much. You have perfectly captured Lydia Bennett's voice, manner and character.

Thank you very much for your lovely comments!