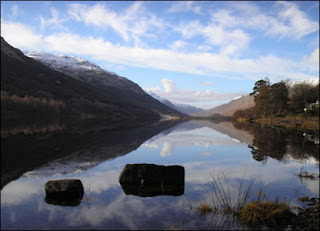 Last week I finished my most recent Regency historical, Kidnapped, a story inspired by the classic book of the same name by Robert Louis Stevenson.
For those who have not read the original, Kidnapped is set in Scotland after the Jacobite Rebellion of 1745 and traces the adventures of David Balfour and the Jacobite soldier Alan Breck Stewart, who was a real historical figure. For me it has all the elements of wonderful storytelling: an exciting and fast moving plot, engaging characters, action and romance. It might not be the first book you would think to "re-imagine" as a Regency, but the idea of David Balfour's inheritance, his kidnapping at his uncle's behest and his subsequent adventures, inspired me to write my own version with a heroine, Catriona Balfour, in the lead role and a Highland hero in Neil Sinclair, heir to the Earl of Strathconan and and officer in the Navy.
Also inspiring is the scenery of the Scottish Highlands. Every year we visit Wester Ross and it is there and in Edinburgh that I have set my story. Hopefully Kidnapped will be published next year. In the meantime I am planning a trip to the Highlands next month in search of more inspiration!
Nicola
Posted by Historical Romance Author at 2:55 PM

Your story sounds wonderful! Actually, it makes me wish some romances came with illustrations; that photograph is breathtaking.

Go to Aberdeenshire, plenty of inspiration there :D