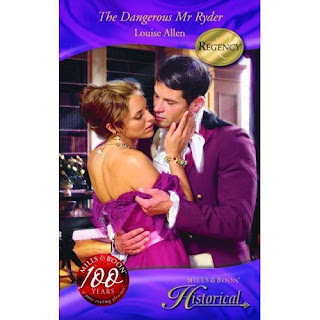 The Dangerous Mr Ryder, the first of my new series Those Scandalous Ravenhursts, is out this month, published by Mills & Boon (July in the US).

Imagine a tiny Grand Duchy clinging to the mountains near the SE French frontier. Imagine it is 1815 and Napoleon has just landed from Elba and is marching on Paris. Imagine a castle towering over a vertiginous drop to the river below.
It is night and a rope dangles from the battements into the void…


The Outrageous Lady Felsham, the second Ravenhurst title will be out in May.

http://www.louiseallenregency.co.uk/
Posted by Historical Romance Author at 6:07 AM

Oh, Louise, what a thing to post on a Wednesday morning when I was all set to be businesslike and efficient.

I now need a calming cup of tea and a sit-down before I tackle the accounts.

Jane said...
What an excerpt, Louise! And what a terrific story: one that is already gathering terrific reviews. (Red roses for Authors)
Easy to see why!
Congratulations.