Yesterday in History - The Duel! 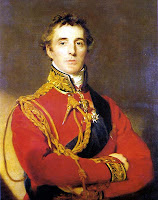 On the 21st March 1829, a famous duel took place in Battersea Fields between the Duke of Wellington and the Earl of Winchilsea. Duelling was very much tied to the defence of one's honour and a man might resort to a duel to defend his honour if someone had intimated that he was a coward, or if a lady's reputation was at stake or even in the case of some bored young aristocrats, simply for sport.
The duel that took place between the Duke of Wellington and the Earl of Winchelsea was a political one. In 1828 Wellington became Prime Minister. One of his first achievements was overseeing Catholic emancipation and granting almost full civil rights to Catholics in the United Kingdom. The decision caused feelings to run very high and Wellington persuaded the King to agree to the reform only through threatening to resign over it. Lord Winchilsea, an opponent of the bill, claimed that by granting freedoms to Catholics Wellington "treacherously plotted the destruction of the Protestant constitution." Wellington, his honour impugned, immediately challenged him to a duel.
The newspapers of the day announced that fortunately the duel had not had fatal consequences - the opponents deliberately missed one another. Wellington had shot wide and Winchilsea had deloped, firing into the air. "Duel Day" is still celebrated on 21st March at Kings College London, a university college founded in 1829 with the backing of non-Anglican Christians and other faiths.
Nicola
Posted by Historical Romance Author at 3:15 PM

Facinating stuff - thanks for this.

Shame politicians don't have duels now. Most just seem to stab each other in the back!

I wonder if there had been a duel between Tony Blair and Gordon Brown if either would have deliberatly missed....we'll never know!

So glad you found the post interesting, and what a great idea! Bring back duels for politicians! Politics sounds to have been much more colourful in those days.

How entertaining. Did large crowds attend to watch, or was it a private affair?

Fascinating, Nicola - is this going to feature in a book soon????

Duel Day - how fabulous. Do you suppose they celebrate it by getting up at dawn for mulled wine and a hot breakfast in St James's Park?

Dear Jan and fellow HRs. Re-enactments of the Duel have been a feature of life at King's for some time as the Duel also touched on King's being a College open to non-Anglicans (one of Winchilsea's complaints). But no live ammunition is used! In fact students and alumni celebrate it in whichever way they want and the more original the better. Singapore branch challenged the LSE alumni to a bowling match, for instance (although a formal dinner with re-enactment is most popular). This year we are hoping to shoot a short film of the Duel. But mulled wine for breakfast sounds an interesting idea. Incidentally, shortly after the Duel, the Duchess of Richmond invited Wellington and the cabinet to Goodwood House for dinner; but when they went into dine, they found the room decorated with 200 stuffed rats for 'Ratting on the Protestant Constitution'! That's what I call politics. If you want to mark 'DD' in 2009, just let me know. Steven Rhodes, Chairman, King's College London Association.

Oh, and to answer Gillian's question, the Duel was organised in secrecy as Duelling was illegal. There are extensive webpages covering the duel here:

Hmm, that should be:
http://www.kcl.ac.uk/depsta/iss/archives/wellington/duel01.htm