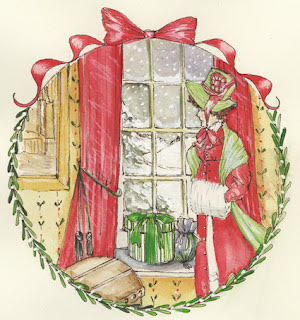 Emma was shown to her room by a cheerful maid.
Once there, her coat and hat were taken and hung up, and her bag unpacked. When she had washed her hands and tidied her hair, the maid, 'I'm Sarah, Miss,' directed her to the drawing room where her hostess waited to greet the arriving guests.

A liveried footman opened the door for her, and as she entered the large elegant room, Emma wondered if marriage might have changed her former pupil for it was an excellent match by any standards. But the smile of delight as her hostess approached with outstretched hands then kissed her cheek laid every doubt to rest.

‘Dear Miss Carstairs, I am so happy to see you.’
‘And I you, Mrs Dawlish – ’
‘No, no! While we are private I am Bessy. But for your endless patience with me I would not be here now.’ Her voice softened. ‘And I am so happy.’

Gazing at the poised young woman beside her, Emma recalled a coltish schoolgirl, gifted, but lacking in confidence. ‘You deserve no less, my dear. I was so thrilled to receive my new portrait. But I fear you have flattered me.’
‘I could not,’ Bessy said simply. ‘You have such lovely eyes. They are always merry, always kind. I kept remembering that while I was painting. Even when you tried to be stern they still held a sparkle of laughter. Come, sit down and let me pour you some tea. How was your journey?’

Emma debated whether to mention the mysterious gentleman who had so kindly carried her valise yet declined to tell her his name. But before she could speak the door opened once more to admit two couples, people clearly well known to their hostess. After introductions had been made and pleasantries exchanged it was time to go and change for dinner.

A little shy in new company, Emma had chosen to wear her favourite gown of primrose muslin with puffed sleeves and a double frill of cream lace at the neckline. Her feet were neat in cream kid slippers, and Sarah had dressed her hair, pinning it up but leaving a single curl falling over her right shoulder. Finally, remembering the tall ceilings and size of the rooms, she drew a long shawl of fine cream cashmere about her shoulders.

On her way down the wide curving staircase she heard laughter and a voice she recognised, and saw her host and the gentleman who had carried her bag, both resplendent in evening dress. Turning, Charles saw her.
‘Miss Carstairs, allow me to present – ’
‘Ellis.’ The interruption was smooth, but Emma glimpsed the surprise that flickered briefly across her host’s face though he recovered instantly. ‘Always at your service, Miss Carstairs.’ His smile was warm and the twinkle in his eyes caused an unfamiliar flutter beneath her breastbone.
‘Mr Ellis,’ Emma dropped a curtsey.
‘Miss Carstairs and I met briefly earlier,’ Ellis told his host. ‘I fear she took me for a footpad.’
‘I was vastly relieved to be proved wrong.’
Charles Dawlish indicated the double doors into the dining room. ‘Ellis, will you escort Miss Carstairs?’
‘It would be my pleasure.’

The meal was delicious, the conversation wide-ranging. Eventually Bessy rose and the ladies withdrew to the drawing room, leaving the gentlemen to their port.
As she answered Mrs Brent’s questions about her work as a teacher, Emma overheard Miss Marshall, who had come with her brother, ask if Mr Ellis was a close neighbour.
‘His uncle owns the property adjoining ours,’ Bessy replied. ‘Charles has known him for years.’
‘And what is his situation?’ Miss Marshall enquired with an interest she made no effort to hide.
But as Mrs Brent chose that moment to enquire about the usefulness of teaching girls a foreign language, Emma did not hear Bessy's reply.

When the gentlemen rejoined them conversation turned to the weather. Mrs Brent confessed to disliking snow. ‘For it is cold and wet and most uncomfortable.’
‘But it is very beautiful,’ Emma said.
‘I see you are quite fearless, Miss Carstairs,’ Ellis’s eyes crinkled at the corners as he smiled. ‘Will you brave the elements and join me for a walk in the morning?’
Hoping that the sudden warmth in her cheeks was invisible in the candlelight, Emma inclined her head. ‘Thank you, Mr Ellis. I should enjoy that.’

Emma was woken by Sarah bringing in a cup of hot chocolate. Used to doing everything for herself, she enjoyed the rare luxury of being waited on. But as soon as the maid returned with hot water she got up and dressed in her warmest gown. She had slept well and felt a pleasurable tingle of anticipation for whatever the day might bring.


After breakfasting with Bessy and Charles, Emma returned to her room to put on her hat and coat and pick up her muff, then went downstairs to the morning room where a cheerful fire blazed in the grate. She looked out of the window. The snow has stopped for a moment, but the sky looked grey and heavy. Would he come? He might assume she would not wish to venture out in such weather.

A footman entered carrying a silver salver on which reposed a letter. He offered it to her.
‘For me?’ Though she had requested that her mail be redirected, she had not expected to receive any so soon. Opening the letter she began to read, and shock brought her hand to her face.

‘Not bad news I hope, Miss Carstairs?’
Emma looked up, startled. Mr Ellis stood, tall and imposing in the doorway. A caped greatcoat reached half-way down his polished topboots and he held a beaver hat in one hand.
‘No, indeed. It is a note from one of my former pupils. What a time she has had! Miss Trenoweth and her father were travelling back from Jamaica aboard a Packet ship that was taken by a Spanish privateer and carried into Tenerife. Her father received an injury in the skirmish, but fortunately it was not serious. They were permitted to return to England on a Danish brig laden with fruit. Miss Trenoweth informs me,’ Emma added wryly, ‘that the Danish captain, besides being tall and having a fair complexion, was most polite. He also spoke excellent English but appeared somewhat shy.’

‘Permit me to observe, Miss Carstairs, that your former pupil appears to be most both observant and resourceful. I would hazard that this is due in no small measure to your excellent influence.’ Without waiting for a response he continued. ‘I trust Miss Trenoweth’s father is making a good recovery?’
‘It would appear so, Mr Ellis.’ Aware once again of the strange flutter beneath her breastbone, Emma refolded her letter. ‘I must write to her.’
‘But not this minute, I hope?’ His brows rose. ‘You promised me a walk, did you not?’
‘Indeed I did,’ Emma tucked the letter into her muff.
He offered his arm. ‘Then shall we go?’