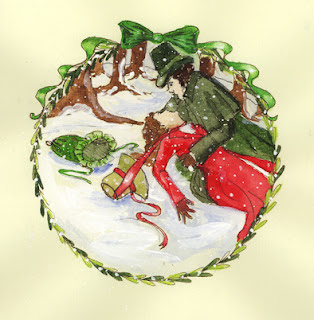 Emma could hardly believe what she was hearing. She stopped walking, withdrew her arm from his and faced him. 'Excuse me, Mr Ellis, did you say that you were not acquainted with Miss Calder, Leticia Calder?'

'Not so I recall, Miss Carstairs.' He shook his head.

What duplicity! What deception! He must think her a simpleton. A simpleton spinster with whom he might amuse himself while-

'Miss Carstairs?' He frowned. 'Have I upset you?'

'Sorry?' Emma tried to quell her anger but her voice came out strangled.

'You have terminated our walk, are standing with your arms folded, your eyes flashing fire, and your little chin is quivering.'

'Ah.' He regarded her for a moment as if in thought. 'Forgive me the familiarity, Miss Carstairs. It was unwarranted.' He offered her his arm again. 'Shall we return?'

Emma tried to collect herself. The facts were these. She had no claim on Mr Ellis. Though he had been pleasant and friendly towards her he had given her no inclination that his intentions went deeper. Therefore it was quite unreasonable for her to be vexed. She was eight and twenty. It was unlikely that any man would look towards a spinster of such advanced years for marriage.

A tear pricked the back of her eyes.

'If we stand here too long, why, we might be buried by the snow.' Mr Ellis smiled. 'Miss Carstairs?'

'Thank you, Mr Ellis,' she managed to say. 'But I shall make my own way back to the house. It is not far.'

She strode ahead before he had time to disagree. She could not keep her tears back a moment longer. 'As you wish,' she heard him say, the snow muffling his words. 'I shall not be far behind you.'

Emma quickened her pace. The harsh air stung her face. Warm tears fell onto her cheeks and then stung the more. She pulled one hand across her eyes to wipe them but her gloves were no handkerchief. The white, unfamiliar world became distorted by the water in her eyes. She could see the verge of the road where the undisturbed snow lay higher, the occasional brown stalk or branch peeking through. It was not far back to the house. The sooner she was back, the sooner she might retire to the privacy of her room and come to terms with her thoughts and feelings in her own time.

The snow was falling fast. It quietened everything and Emma was aware that she could hear her own breathing. She listened, wondering if Mr Ellis was far behind her. She heard no footsteps. Nothing but the rustle of the breeze playing with the billows of snowflakes.

A quick of fear leapt up within her. Was she really alone? She walked faster, nearly stumbled.
'Miss Carstairs?' she heard Mr Ellis call. He sounded very distant.

A distant rumble grew louder and she jumped onto the verge to avoid a carriage and four traveling at surprising speed for the weather. Were they more visitors to the Dawlishes?
She stepped down from the bank. Her foot struck a root. And she was lying in the cold, one cheek pressed against the snow. At least it has softened my fall, she thought. I am not hurt.

If only she was eighteen rather than eight and twenty, then she might say she had twisted her ankle and he might rescue her, perhaps carry her all the way back to the house just as he had done when she had fallen while skating. Except that now she would appreciate it all the more. Emma sighed, the deep and familiar sense of loneliness reminding her that even if Mr Ellis was not betrothed, she would no such thing.

'Miss Carstairs?' He crouched down beside her and she felt the warmth of her hand on her shoulder.

'Let me help you up.' His voice sounded very soft. Wonderfully soft, and kind.

He held onto both her shoulders as she sat up and then moved so that he held her hands with one hand while he other slid behind her back. Emma looked at him, wondering at the concern in his brown eyes. Concern for her? Her alone?

Any moment now she would rise and the spell would be broken.

He came closer to her so that his face was only inches from hers. She felt his breath, warm on her cheek. 'Can you stand?' he said.

Their eyes met. Emma mumbled her reply. She watched his gaze lower so that he was staring at her lips. Then he looked at her directly again and seemed to recollect himself. He pulled her to her feet, pulled her out of her reverie.

Emma stumbled against him, meeting the hard warmth of his chest. The tip of her bonnet touched his chin. He held her firmly and she was looking into his eyes once more, watching every blink of his dark lashes.

'My reticule,' she said, suddenly feeling confused. 'It is still on the ground.'

Ooh, ooh, now I want to know who is in the carriage! The real Mr Ellis? Another ex-pupil?

You do realise that it's extremely bad for the blood-pressure making us wait another two days for the next part?

We are a cruel bunch of writers! But we are only following in a great tradition - didn't Dickens produce his works in serial form?

Good luck to those who have to finish this story - it's going to be a cracker (if you will pardon the pun)!

Happy Christmas from a frosty Yorkshire

I'm enjoying your series. Thanks for the holiday treat.

This is wonderful. I am so enjoying this story! I look forward to checking here every day for an update. Thank you for this Christmas treat!

I really enjoyed writing my episode so it's not just the readers who are enjoying this story :)