Christmas Story Part 6 - An Encounter in the Snow 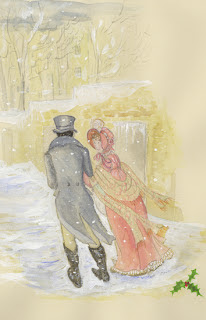 For a moment Emma was thrown into utter confusion. The letter fell from her hand again and this time it was Mr Ellis who picked it up for her. He was smiling at her and there was such warmth in his eyes and such open sincerity in his expression that her heart gave a little errant thump before sinking lower than her boots. Treacherous Mr Ellis, entertaining himself with a flirtation with the spinster schoolmistress to while away the time, when he was secretly betrothed to another lady! His compliments were false and his meaningful glances meant nothing at all. Emma had not realised until that moment the extent to which her feelings were engaged and now she was flustered and distressed. She should have known better. She might live a relatively secluded life at her school but she prided herself on her sound commonsense and she was no green girl to develop a tendre for a gentleman just because he had showed her a little attention. Then an even more lowering thought occurred to her. Perhaps she had misread Mr Ellis’s attentions to her.
Perhaps he was merely being kind.
Yes, decidedly that would be the case. He had taken pity on her. Her instinct told her that he was too honourable a man to have betrayed Letty. Emma was the one who had misinterpreted the situation.
Even so, she could not face him with equanimity. “You must excuse me, Mr Ellis,” she murmured, with no great composure. “There are some letters that I need to write this morning.” She glanced outside where the sun was shining on the crisp white snow. “I find I have no appetite for a walk after all.”
He looked boyishly disappointed. “Can I not persuade you to change your mind, Miss Carstairs? It is so beautiful outside-”
“I am sorry.” Emma shook her head decisively. Stuffing Letty’s missive into her reticule she got to her feet and hurried from the room. Bessie’s guests were assembling in the hall and Emma was very aware of Miss Marshall’s gaze fixed on her face with open curiosity.
“Please excuse me, Mrs Dawlish,” she said to Bessie in a low aside. “I think I shall stay in my room this morning.”
She did not wait for Bessie’s reply, for she was very aware that Mr Ellis had come out of the sitting room and was crossing the hall, making straight for her side. For all his courtesy it seemed that he was not the sort of man to accept a dismissal without what he felt was a proper explanation. She sped away up the stairs to her room, but when she reached the turn in the staircase she could not help herself and glanced back over her shoulder. Mr Ellis was watching her with a hint of puzzlement in his eyes. She turned away, afraid of what might he might read in her face.

Mr Ellis did not stay to take luncheon with the Dawlishes and their guests and Emma could only be grateful. In the afternoon she put on her bonnet and pelisse, gloves and shawl and set out for the village. Her excuse was the urgent need to post a letter but she also hoped that the fresh air would raise her spirits. She had never been one to repine and she knew her disappointed hopes should not be permitted to stand in the way of her enjoying the rest of the house party.
As she came down into the hall Emma saw Bessie and Charles snatching a quiet moment together. Their heads were bent close to each other and Charles was smiling down at his wife. They were talking in low voices.
“I am sure that there is some partiality on his side,” Bessie was saying. “Though why he has to indulge in this deception over-” She broke off as she saw Emma and smiled. “My dear Miss Carstairs, I do hope you will enjoy your walk to the village, though I fear it looks as though there is more snow on the way…”
The morning had started out brightly but there were grey clouds piling up in the east and the wind did indeed have a chill edge with a hint of snow. At the post office Emma dropped off her note of congratulations to Letty Calder and picked up some letters for Wintersmede Hall. There was another letter addressed to her and normally Emma would have waited until she was back in the privacy of the Hall to open it, but when she discovered that there was nothing to pay because it had been franked by a Member of Parliament, her astonishment was so great that she stepped aside into a quiet corner and opened it. She was so engrossed in the contents – smiling with amazement and pleasure to hear of the betrothal of another of her girls in what was a most advantageous match to Sir William Litton MP – that she failed to notice the change in the weather.
“Excuse me, ma’am,” the postmaster spoke hesitantly, “but the weather is turning inclement.”
It was true. Huge flakes of snow were floating lazily down from a pewter sky. With an exclamation Emma gathered up the letters and hurried out into the lane that led to the Hall.
She had gone a bare few yards when the wind suddenly whipped the snow up into a storm. In the gathering gloom she did not see the tall figure approaching her until Mr Ellis fell into step beside her. There were snowflakes melting against his lean cheek.
“Miss Carstairs! How is it that you are out here all alone in the snow?” He demanded.
“I came to post a letter,” Emma said, trying not to shiver beneath her thin pelisse. “I did not realise the weather threatened to turn so stormy.”
Mr Ellis nodded, wasting no further time on explanations. “We must get you back to the Hall before you catch a chill, Miss Carstairs, for I do not have so much as an umbrella to protect you.”
Emma put her hand on his proffered arm, feeling the hardness of the muscle beneath his sleeve and noting the protective way in which he curved his body to shield hers from the storm. And suddenly she could not bear there to be any pretence between them.
“Mr Ellis,” she said. “There is something that I must ask you.”
He glanced at her enquiringly through the thickly falling snow.
"Yes, Miss Carstairs?”
Emma took a deep breath. The epitome of learned, lively and intelligent society… The words seemed burned on her mind.
“I believe that you must be acquainted with the family of a former pupil of mine,” she said. “The Calders.”
Mr Ellis shook his head slowly. He looked her directly in the eyes and his own were very clear. “I do not believe so, ma’am. I do not recognise the name. I think you must be mistaken.” He smiled at her, drawing her more closely into the shelter of his body as the snow swirled around them. “Why do you ask?”

That's better. Thank you, Nicola. I've been on tenterhooks.

Oh well done, Nicola! I love the way this mystery is building. Jan may be satisfied, but now I am intrigued to know what comes next!

Glad you liked it! I love the way the story is developing and I want to know what happens next as well! Not long to wait now!