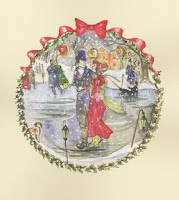 Emma elected to have dinner in her room that night, exhausted by her journey and the walk with Mr. Ellis. She hated to admit she was such a weakling, but sometimes tiredness did catch up with her and she had a disinclination to appear at dinner in less than fine fettle. Bessie kindly sent up a selection of the raciest novels, the kind she would have been in deep trouble for possessing at school. Chuckling, Emma chose one to amuse herself with and fell asleep engrossed in the dilemma of a heroine who did nothing but scream and get herself into stupidly idiotish situations which a small amount of foresight could have helped her avoid. However the writer had an interesting turn of phrase and the hero was handsome and brave, which helped to make up for the foolish heroine.

In the morning the maid woke Emma with breakfast on a tray and three notes, one of them a note from an old pupil, a young miss currently enjoying the preparations for her first season next year. She read it with pleasure, catching up on all the gossip and chitchat she loved to read about but was dreadfully afraid she should not care for at all. What it must be to be high-minded!

She picked up the other note, a kind word from Bessy wishing her well and hoping that she felt better now. “We have planned a skating party for today,” Bessy informed her. “I hope you feel well enough to join us. Don’t worry about the skates, we have plenty. If you do not wish to come, ask the maid to show you to the library. I’m sure you will find much there to amuse you!” Smiling at her former pupil’s effrontery, she picked up the third note and her smile faded.

It was from Mr. Ellis. Emma wasn’t sure it was proper to receive a private note from a gentleman but the frisson of awareness that skidded down her spine told her she would not refuse to read it. That would be foolish, though she should probably admonish him for his effrontery.

“I was sorry not to see you at dinner, Miss Carstairs. Mrs. Dawlish informs me you were tired. I hope our jaunt into the garden didn’t exhaust you too much. It was a delight to share the joys of a winter day with you. Please do not hesitate in tasking me with any small errand to aid with your comfort.”

Well as if she was weak enough to miss a treat like a skating party! A good night’s sleep had cured her of any ailments she might have had. Helped by the maid assigned to her, one Collingwood, she dressed as warmly as she could, discovering a strange wish that her clothes weren’t quite so out of date. Emma was fully aware of the picture she must present to the world. Neat, clean and tidy was all that was expected of her. Once she’d wished for so much more, and although only five years had passed since her father’s death, it sometimes felt like a lifetime. Once she’d been accustomed to a maid of her own and luxuries like new lace for her gowns every season, even a new bonnet every so often instead of making over her old ones but those days had long gone.

She shook off her melancholy, telling herself it was not like her to repine. Foolishness, when she had so much!

Outside the air was crisp and fresh, redolent with the scents of winter—pine and that strange crisp scent of cold air. Hastily she pulled on her gloves, wishing they were lined in something warmer than silk, but needs must. This time of year she usually spent in her home, hibernating until the beginning of the next school term. So her pelisse was a little on the thin side, too and she had no tippet to ward off the cold. Still, it wouldn’t matter once she was on the ice. The exercise would keep her as warm as toast.

The lake wasn’t far from the house and once the maid had shown Emma the way, the girl scuttled back to the relative warmth of the house. Bessy greeted her warmly, her fur-edged pelisse suiting her bonny frame to perfection. Bessy had done very well for herself, not only in the material gains of her marriage but in her husband, too, a most affable young man.

Emma hadn’t much time to look about because Mr. Ellis was upon her, his handsome face wreathed in smiles. “Why I am so glad you decided to join us, Miss Carstairs! May I escort you on the lake?”

She couldn’t imagine why she felt so tense in his company for he was the most delightful company possible, but when she looked up at him, his eyes held a warmth she wondered at. It didn’t seem entirely seemly for him to devote his attention to her in such a way but in the company of the entire houseparty she couldn’t complain. He helped her to a bench set by the side of the frozen pond and kindly fastened the skates for her. She blushed at the scuffed state of her half-jean boots but he didn’t seem to notice.

Once, his fingers ventured above the boots to touch her calf with the lightest of caresses. She couldn’t be sure if it was by design or accident, but when he stood up to help her to her feet, colour mantled his cheeks.

She was sure it marked hers, too.

“I have never done this before, only once when I was very little. Skate, that is,” she hastened to add.

“I will help you, Miss Carstairs.” After greeting the other guests and assuring them she was fine, she allowed Mr. Ellis to help her on to the ice.

Ice was as slippery as she remembered. At first tentative, she found the trick of it fairly quickly and began to enjoy herself. Eventually she dared to release Mr. Ellis’s arm.

Gliding across the frozen lake, Emma dared to look up and smile at her kind helper. She hadn’t realised skating was quite so easy.

That was her mistake, for one foot seem to slip from under her and she couldn’t stop herself tumbling to the cold, hard ice in a dreadful flurry of skirts. “Oh!” That was all she could manage as all the breath left her body

Mr. Ellis’s face swam before her eyes and even through her distress a sense of shame and failure drenched her in freezing condemnation. “Emma—Miss Carstairs—don’t try to get up. Allow me to take you into the house.”

Before she could find any breath to protest he swept her up into his arms, and cradled her to his chest. Her resultant dizziness was not entirely due to her accident. He was deceptively muscular, lifting her without seeming effort. His thick wool coat smelled of camphor and strong, hard male. Emma hadn’t been this close to a man since she was a child, and even then very rarely. “No,” he said firmly to Bessy, “Do stay here, ma’am. Miss Carstairs is merely winded. Allow me to take care of her. I will send for a maid and ensure she is well.”

Ignoring her gasped protests he strode across the ice, having kicked off his skates. “Sir, there is no need! Please let me down!” But he wouldn’t allow her to move. His kind face smiled down into hers. “Allow me this privilege, Miss Carstairs! I cannot help but blame myself for this accident. I should have made sure I was with you at all times.”

Although she found it charming that he wanted to look after her, a sense of annoyance filled her that he should think her so helpless, but it couldn’t be helped for she couldn’t get her breath for some time. When she moved her head to try to assure him she was well, she found she hadn’t got off scatheless because her head connected with one of the large brass buttons on his greatcoat and even that slight touch made her wince and cry out.

“No sir, the merest bump. Some vinegar and brown paper and I shall do, I assure you!”

She didn’t know where to look when he entered the house, but the maids fluttered around her until Mr. Ellis told them firmly to make some tea and be quick about it. He took her to a small, pleasant sitting room where a fire crackled in the grate and laid her down carefully on the sofa set before it.

Posted by lynneconnolly at 2:24 AM

I came here through a mention on an elist and I love the idea of an Xmas serial, thanks for doing this and Merry Christmas!

I llove the illustrations they're really beautiful and perfect for getting into the Christmas mood.