I've had a busy year in 2007 with five books published: 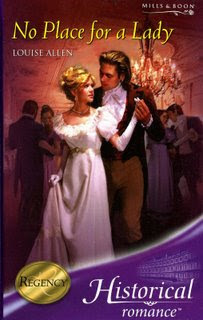 Not Quite a Lady (Mills & Boon)

Virgin Slave, Barbarian King (Harlequin. Mills & Boon in 2008) (Cataromance41/2 stars".a powerful love story featuring two vividly drawn characters you will findabsolutely impossible to resist. Rich in history, passion and intrigue. Another stellar example of Louise Allen's storytelling prowess.")Virgin Slave, Barbarian King was fun to write - set in 410AD it was my firstdeparture from the Regency since my very first book for Mills & Boon.

I have been hard at work on the first three Those Scandalous Ravenhursts books in a six book set - focusing on the loves and adventures of seven cousins. The Dangerous Mr Ryder, The Outrageous Lady Felsham and The Shocking Lord Standon will be out with Harlequin and Mills & Boon in 2008 with three more titles to come. This year has been both busy and successful for me.

'The Mesalliance' and'Lord Thurston's Challenge' were published by Robert Hale and both received excellent reviews. I only wish Hale printed paperbacks so that more people could have access to them.

'A Suitable Husband' and 'A Dissembler' appeared in LP and my first novella, 'The Return of Lord Rivenhall' was released in LP paperback. Robert Hale took two more from me; 'A Debt of Honour' comes out in February 2008 and 'The House Party' in July 2008.


My second novella,'A Journey to Love' came out in July, but many of my friends missed it as it was originally called 'A County Mouse', and I hadn't known they were changing the title. I have also sold two novellas to My Weekly Pocket Books,but they will not appear on the shelves until 2009.


I had the pleasure of visiting Norwich Writers Group, which meets in the lovely Assembly Rooms. I gave a talk about my writing career so far and also judged their short story competition. Belgrave, an e-publisher, has got both of my novellas up on Regencyreads and I was thrilled to receive a third royalties payment the other day. 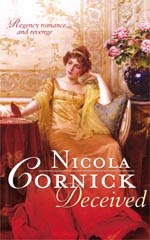 This year saw the UK release of Deceived and the US publication of Lord of Scandal from HQN Books. I was thrilled when Deceived gained rave reviews and was nominated for the Pure Passion Award plus a host of other prizes!


My seventeenth century set novel, Lord Greville's Captive, was shortlisted for the RNA Romance Prize as well, so it has been a very exciting year.


Meanwhile I have been continuing my historical research and have written pieces for the Historical Novels Review and for other publications on "Hero Myths" and "The Cult of Celebrity in the Nineteenth Century" and given talks based on my research.

Nicola Cornick
Posted by Historical Romance Author at 9:24 AM